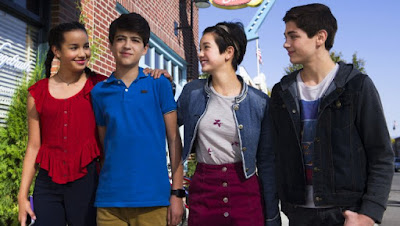 In Africa's growing TV censorship problem Kenya has banned the Disney Channel's (DStv 303) tween series Andi Mack, making it the latest TV series that MultiChoice says won't be broadcast on DStv - not just in Kenya but blocked for the whole of Africa.

MultiChoice and Disney won't broadcast Andi Mack in Kenya or anywhere else in Africa - including South Africa - following news that the show will introduce a gay story line.

The Kenya move is effectively blocking the show from being broadcast anywhere on the continent, including countries like South Africa, since the Disney Channel (DStv 303) has only one channel feed into the continent.

Andi Mack is the latest show getting banned on the continent after last week's announcement that a main character will come out as gay, with Disney telling TVwithThinus that Andi Mack won't be broadcast on DStv.

Over the past two years especially Nigeria and Kenya's censorship boards have been ramping up bans on TV shows.

With distributors often only providing one satellite channel feed into Africa for their channels – for instance Disney Channel – a block and ban of a show for one country means its taken off air for the entire continent even in countries where content are not censored.

The Kenya Film Classification Board (KFCB) banned Andy Mack, with KFCB boss Ezekiel Mutua saying "any attempt to introduce gay programming in Kenya will be met with the full force of the law".

"When it comes to protecting children from exposure to bad content we are resolute and unapologetic. Gay content will not air in Kenya, period."

Pay-TV operator MultiChoice running the DStv service that carries Disney Channel (DStv 303) in Africa says in a statement "MultiChoice has consulted its channel provider, Disney and would like to confirm that this show was not scheduled to air on any of the Disney channels on DStv".

The Walt Disney Company Africa in response to a media enquiry from TVwithThinus says "Andi Mack will not be broadcast through DStv, however we are exploring alternative ways to make the series available to its fans in South Africa".

Disney says that "while our shows are developed for global audiences we are committed to respecting each market’s cultural sensibilities, compliance rules and regulations. Disney Channel in South Africa serves multiple countries across Africa and the Middle East, each with its own regulations to which we adhere".

It means it's not watchable for anyone in Africa.

Star vs the Forces of Evil and Gravity Falls from Disney XD (DStv 304), as well as Adventure Time and Steven Universe from Turner Broadcasting’s Cartoon Network (DStv 301) channel in Africa were also banned.

In July 2016 VIMN Africa said it would censor and not broadcast an episode of The Loud House featuring gay dads on DStv in any country following complaints in Africa.


In May 2016 NBCUniversal International Networks was forced to pull the second season of I Am Cait from E! for the entire Africa after a sudden TV-ban in Nigeria.

In October 2015 Discovery Networks International was forced to remove the transgendered docu-series I Am Jazz from TLC for the whole continent, also following a Nigeria-ordered ban.
on 7:12:00 AM