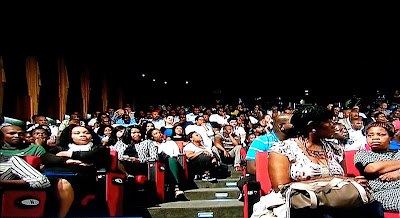 SABC staffers at the beleaguered public broadcaster on Thursday lashed SABC management when workers in a packed Auckland Park auditorium gave voice to their anger, fears and frustrations and openly slammed management as "inept and ignorant".

Hundreds of frustrated SABC staffers at the public broadcaster's head office and SABC regional offices launched an avalanche of direct questions and pointed comments at the SABC's interim board on Thursday.

The flood of questions, demands for answers and public grievances came during a jam-packed meeting in the SABC's Auckland Park auditorium with SABC staff during a visit of the SABC's new interim board members and members of parliament's portfolio committee on communications on Thursday.

Frustrated workers told management they don't even have contracts even though they've been working at the SABC for years, told of "black-on-black oppression and victimisation of people" at the SABC and even alleged that the broadcaster "still has the remnants of Apartheid bothering us".

"Is there money or is there no money?" asked one staffer.

Staffer after staffer stood up inside the auditorium and told the SABC interim board and SABC management point blank of alleged nepotism in hiring, corruption and victimisation inside the South African public broadcaster that's once again buckling under a worsening financial crisis that's now been forced to once again dip into its fast-dwindling cash reserves.

Thandeka Gqubule was one of the so-called "SABC8" staffers who were fired and forced by the court to be rehired after they were dismissed for opposing the SABC's controversial news censorship policy that the broadcasting regulator eventually found to be illegal.

"If you can secure us able, educated, skilled management, half of this won't happen," she said to loud applause.

The SABC's interim board told upset, scared and frustrated staffers uncertain about the future of the SABC, that they will try to restore the tattered image of the SABC and promised to give SABC staffers answers by early-June.
on 8:57:00 AM