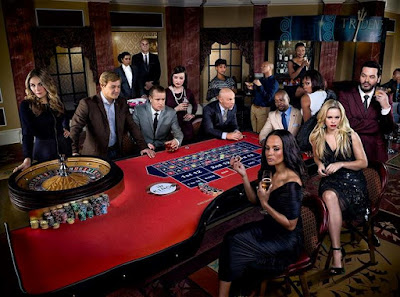 Shock and disbelief is reverberating through South Africa's television industry as the SABC that promised more, not less, local content for SABC3, has decided to abruptly cancel the local weekday telenovela High Rollers within 30 days - but the producers are fighting back, saying they are adamant for the show to remain on the air.

The SABC launched High Rollers with big fanfare in April 2013 at 20:30 with hour long episodes and renewed it for a second season in 2015 and moved it to 19:30 as a half hour drama.

The show was renewed for a full third season of 156 episodes in May this year and extended from three to five days per week with the SABC no longer calling it a telenovela but a primetime weekday soap.

After the production company with producing and directing brothers Luke and Josh Rous, struggled for four and a half years to finally get the show on the cash-strapped SABC in 2013, the SABC now suddenly wants High Rollers with its large ensemble cast gone and cancelled - within 30 days.

The shock decision comes despite the controversial SABC boss Hlaudi Motsoeneng who said the SABC is not just fighting for more job security for actors and TV biz workers, but also supports local content and just months after he said the SABC will increase SABC television content to 90% local, starting with 80% local content on SABC3.

While the fictional Kings Casino set High Rollers has never been a strong ratings performer, it is local content produced by a local cast with local producers - the type of content and show the SABC's Hlaudi Motsoeneng said the public broadcaster now values as it rids its TV schedules of foreign content and international shows.

It is however in line with and part of the entire SABC3 schedule that saw a viewership implosion since June with the channel's ratings falling month after month since May as South African viewers have shunned all the new local content rushed to air and dished up on the struggling channel's line-up.

Last month, for the first time ever in SABC history - and doing it again in November - SABC programming executives decided to replace High Rollers on SABC3 with Generations from SABC1 due to soccer.

The disruptive move was the first time in the history of the South African public broadcaster that it replaced one locally produced SABC TV soap with another of its locally produced TV soaps for sport reasons, and through it signaled that High Rollers and that show's viewership doesn't matter that much - or matters less - than Generations.

Gone in 30 days?
While High Rollers as a weekday, primetime soap on SABC3 is what is known as an "anchor programme" - episodes are stripped daily on weekdays, at the same time, courting a dedicated audience who habitually tune in and who are following an ongoing narrative - the SABC now wants to dismantle it, just as SABC2 started its own local telenovela, Keeping Score last month.

High Rollers is however planning on fighting back, since its sudden cancellation with leave a large group of people suddenly out of work.

The shocked production company Rous House Productions says "the SABC have signaled their intent to cancel High Rollers within 30 business days" and was told the SABC is taking the decision "based on programming strategy changes on SABC3".

The production company that's also responsible for the Setswana sitcom Ga Re Dumele on SABC2, Gauteng Maboneng and sitcom City Ses'la on SABC1, says "Rous House Productions does not agree with the SABC's cancellation letter".

Rouse House Productions in a statement says that it's working with the SABC to try and "resolve this matter".

The SABC didn't immediately respond to media enquiries made on Saturday morning about why the broadcaster wants to end High Rollers.