SABC suddenly advertises for a new CEO in newspapers again - just 5 months after it said it will immediately stop advertising vacancies in newspapers. 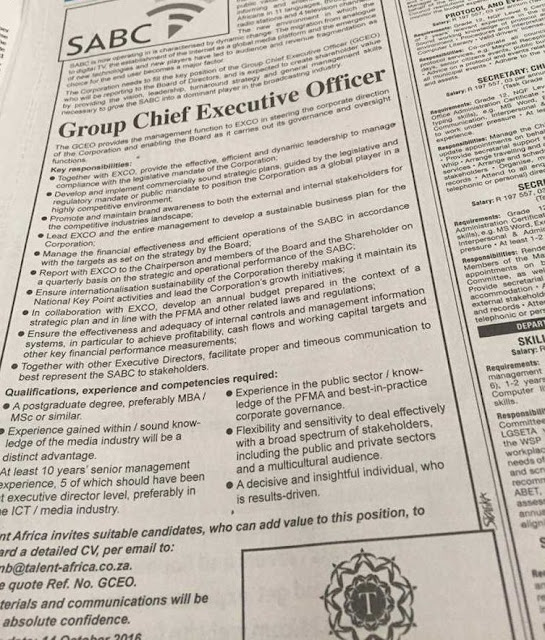 The SABC is suddenly advertising for a new CEO, marking a U-turn just 5 months after the public broacaster declared that it won't advertise any SABC jobs externally anymore.

In May, Hlaudi Motsoeneng brazenly declared that the SABC "don't see a need to use print media".

The SABC is now looking to replace Frans Matlala who was recently fired with a golden handshake worth millions of rand after he was abruptly suspended in November 2015 after just four months in the job.

Frans Matlala was allegedly axed because he helped National Treasury with an investigation into the controversial SABC executive Hlaudi Motsoeneng's procurement of a multi-million rand studio that was constructed but was not put out to tender.

In the SABC's latest financial report for 2015/2016 released on Thursday the SABC only notes that Frans Matlala was suspended but refuses to provide a reason in its annual report for as to why.

The SABC has now had 11 CEOs – including those who were appointed in an acting capacity with James Aguma being the latest – since 2009.

They said that the SABC had taken a decision to end external advertising for jobs and tenders in any print and other media and would only be using its own TV channels and radio stations, and also not make use of the services of any services of external media agencies anymore.

"The SABC decided that it will advertise its employment vacancies and tender advertisements on the SABC's television, radio and digital platforms only. This will be implemented with immediate effect," said Hlaudi Motsoeneng in April.

The CEO advert of the SABC has a closing date of 14 October for applications.

The famously matricless Kaizer Motsoeneng – who the Public Protector in her February 2014 found in a recorded interview admitted that he lied about about having a matric certificate and made up symbols for a certificate he didn’t have – wouldn't be able to apply.

The SABC is looking for candidates with post-graduate qualifications, preferably a MBA or Msc and who has "sound knowledge of the media industry".

At least 10 years of senior management experience is required as well as "best-in-practice corporate governance".
on 2:31:00 PM