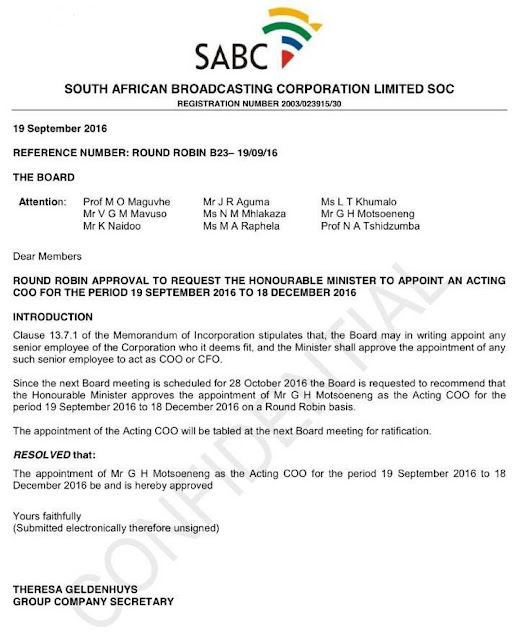 Here is the draft letter that was leaked to TV with Thinus on Thursday by SABC insiders.

SABC board members - including Hlaudi Motsoeneng who isn't supposed to be an employee of the SABC anymore according to the Supreme Court of Appeal (so how can he vote?) - were asked this week to vote him(self) "back" into the SABC as "acting chief operating officer (COO).

After the Supreme Court of Appeal ruling, some SABC board members - in a plan spearheaded by SABC board chairperson Obert Maguvhe to keep the "rare skill" Hlaudi Motsoeneng at the SABC, hatched a plan for a "round robin" vote to vote Hlaudi Motsoeneng back as "acting COO".

The Public Protector in her February 2014 found that Hlaudi Motsoeneng "should never have been appointed at the SABC".

The Public Protector in her February 2014 found that Hlaudi Motsoeneng was directly involved in several instances of gross maladministration, dramatic salary increases for himself and others that ballooned the SABC salary bill, and implicated him in getting rid of everyone at the SABC who testified against him at an earlier disciplinary hearing.

In the draft resolution sent to SABC board members, as part of a convoluted back-door plan, the minister of communications Faith Muthambi is asked to reappoint Hlaudi Motsoeneng as acting COO.

The department of communications says it hasn't yet received such a letter.

"Since the next board meeting is scheduled for 28 October 2016 the board is requested to recommend that the Honourable Minister approves the appointment of Hlaudi Motsoeneng as the acting COO for the period 19 September 2016 to 18 December 2016 on a Round Robin basis," says the draft document.

"The appointment will be tabled at the next board meeting for ratification."

SABC board member Krish Naidoo in reports said the SABC board's plan is illegal and that he didn't vote yes to support the resolution.

Krish Naidoo told The Times and EWN radio that "when a court says Hlaudi Motsoeneng should not be COO and you appoint him acting COO, it means you haven't applied your mind".

"The SABC is an important institution. The president and the ANC should open their mouths now and say something decisive".

Krish Naidoo slammed other SABC board members saying those who voted in favour of appointing Hlaudi Motsoeneng as "acting COO" are "acting contrary to the rule of law".
on 1:20:00 PM