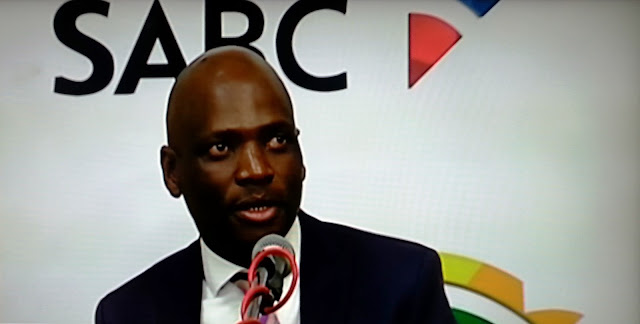 The famously matricless and belligerent chief operating officer (COO) of the SABC, Hlaudi Motsoeneng said the SABC will defy the order of South Africa's broadcasting regulator, Icasa to immediately end censorship of SABC TV News visuals of protests because Icasa is "not a court" and said that the SABC will take the case to the Constitutional Court.

The autocratic broadcasting tzar Hlaudi Motsoeneng said nobody can dictate to the SABC what to do and what not to show, not even the South African broadcasting regulator that oversees the SABC's broadcasting licence and monitors its adherence to its licence conditions.

Icasa says its rulings and orders as the broadcasting regulator are binding.

At yet another late-start, mangled, confusing and off-message SABC press conference on Monday afternoon, 4 SABC'ers - the SABC chairperson Mbulaheni Maguvhe, SABC board member Aaron Tshidzumba, Hlaudi Motsoeneng and the SABC's PR tzar Kaizer Kganyago - all uttered 4 different comments regarding the SABC's stance regarding the regulator's order for the SABC to end its ban on broadcasting the destruction of property during public protests introduced in May.

Interestingly both Mbulaheni Maguvhe and Aaron Tshidzumba - the only two SABC board members present at the SABC press conference - have been the most vocal, publicly, the past month, in their support of both Hlaudi Motsoeneng, as well as his decision of SABC TV News censorship of public protests in South Africa.

Interestingly, the minister of communications, Faith Muthambi, on Monday afternoon defied an ANC summons to appear before a meeting of the ruling ANC political party's subcommittee on communications to explain the litany of crises at the SABC, Hlaudi Motsoeneng, and the SABC's news censorship decree.

The bombastic exclamation on Monday afternoon by Hlaudi Motsoeneng that the crisis-riddled SABC will ignore and defy the order from the Independent Communications Authority of South Africa (Icasa) handed down on Monday morning.

Hlaudi Motsoeneng said that he will not ends his censorship decision that will be fought to the Constitutional Court. This follows the stubborn pattern exhibited by the controversial SABC boss.

The dictatorial Hlaudi Motsoeneng ignored the Public Protector's February 2014 report from the Chapter 9 institution that implicated his in maladministration, found that he lied about qualifications and a matric he doesn't have and said "Hlaudi Motsoeneng should never have been appointed at the SABC".

The beleaguered Hlaudi Motsoeneng is also embroiled in several court cases over his appointment as COO at the SABC and other matters.

All court rulings so far has found against him and ordered the SABC to suspend him immediately, all of which he has defied, with ongoing appeals, adamant to fight and take his court cases to the Constitutional Court.

The latest of South Africa's Chapter 9 institutions that Hlaudi Motsoeneng is now trampling on, is the broadcasting regulator, Icasa, that regulates the entire South African TV industry - the authority that could revoke the SABC's TV broadcasting licence should it fail to comply with its order on Monday for the SABC to stop censoring SABC TV news broadcasts.

The South African broadcasting regulator found the SABC guilty of  breaching both the Broadcasting Act and its licensing conditions, as well as the South African Constitution and ordered it to end its SABC censorship decision, backdated retro-actively to 26 May.

"No-one is going to tell us what to do within organisation," said Hlaudi Motsoeneng.

"I don't know why people want to dictate to the SABC. We are clear on what we are doing, and we still believe that we are within the Broadcasting Act," said Hlaudi Motsoeneng.

"The Icasa ruling, we are challenging that ruling. If we need to go to the Constitutional Court, that is where the matter will end," said a defiant Hlaudi Motsoeneng.

"We are not going to change anything. You must forget," said Hlaudi Motsoeneng at Monday afternoon's hastily convened SABC press conference that was interrupted by a Right2Know protester who shouted "Hlaudi must go, away with censorship. Away with Hlaudi. History will judge you."

"People have been talking elections, saying SABC is not going to be fair, because blah, blah, censorship. I don't know what is censorship," said Hlaudi Motsoeneng.


■ Compared with Hlaudi Motsoeneng's utterances on Monday, tho other SABC board members and the spokesperson said wildly different things - different messages about the same subject, illustrating how confused the SABC has become internally when it comes to sending a message to the press.

SABC chairperson Mbulaheni Maguvhe said: "I still believe that we were right [to censor SABC TV news]. And I maintain that we are right. For us it's not a blanket ban, it's just a veil. You can see through it."

"Freedom of information doesn't mean that our children, whose minds are not yet ready to digest these visuals, that we should expose them to these visuals, to grow to be hooligans and irresponsible citizens".


SABC board member Aaron Tshidzumba said: "Icasa is Chapter 9. It is not a court of law. It recommends issues."

"We will go to all avenues to answering this Icasa's issue. To prove to them that if they've recommended using rumours, or legal advice which is not informed by broadcasting, we are broadcasters, we're still correct on that".