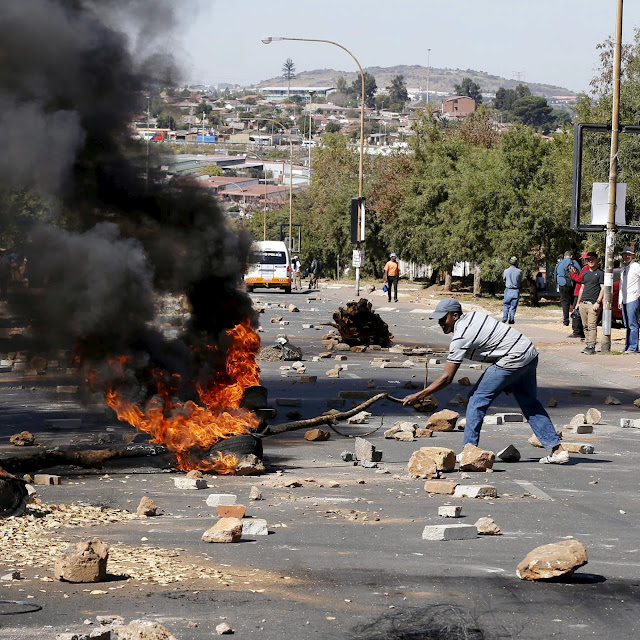 The SABC has come up with mind-boggling reasons for why the public broadcaster suddenly decided to censor public protest visuals on SABC TV news, telling the broadcasting regulator that stray bullets might hit journalists, that it can't show violence that would "advance the plot" and that police cameras are present to capture visuals, instead of journalists, anyway.

A public hearing is set for 12:00 today at the Sandton office of the Independent Communications Authority of South Africa (Icasa) after Media Monitoring Africa (MMA), the Support Public Broadcasting Coalition and the Freedom of Expression Institute (FXI) lodged a complaint at Icasa's complaints and compliance committee over the SABC's censorship decision.

Besides a public protest that will also take place, an online petition, "Stop SABC Censorship" has amassed close to 5000 signatures.

In an affidavit responding to the complaint, Jimi Matthews, the SABC's acting CEO, puts forth mind-bending reasons for the SABC's sudden decision that's come in for sharp and near-universal criticism and that makes for hilarious reading if it wasn't such a serious matter.

Jimi Matthews told the regulator that the SABC has a responsibility not to expose its journalists and cameramen to "the dangers of being hit by stray bullet blows or affected by violent actions of protesters as has happened before".

He also says the SABC's journalists don't need to film protest violence, since the South African Police Service (SAPS) has their own cameras and will do so. "Where there are members of the South African Police Service in protests‚ especially violent protests‚ the police have their own photographers and cameras to cover the situations as this conduct is criminal in its nature in terms of the law".

Going even further and using text from the Broadcasting Code signed by broadcasters actually less applicable for news coverage but fictional television like movies and drama series, Jimi Matthews told Icasa that it can't show violence that's not integral to advancing a story's plot.

It's not clear how the SABC knows beforehand how the "plot" of covering an unpredictable and developing news story will unfold.

"The Broadcasting Complaints Commission prohibited the airing of gratuitous violence – that which did not play an integral role in the development of the plot, character or theme of the material," said Jimi Matthews.

The SABC didn't provide any marketing research or other research that was used for its decision; earlier this month in an interview the SABC's controversial and famously matricless chief operating officer (COO) Hlaudi Motsoeneng said "I don't believe in scientific research".

This past week the SABC came in for scathing criticism for its below-par coverage of the Tshwane unrest,compared to the full-visuals and rolling on-location news coverage that rival TV news channel on DStv, eNCA and ANN7 brought to viewers.
on 10:05:00 AM