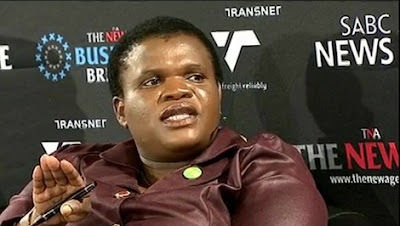 The minister of communications Faith Muthambi again lashed out at South Africa's press - especially private media - for not reporting on "the good" government is doing, saying that the government is planning to transform private media in the country that's only interested in reporting "scandals".

A rambling Faith Muthambi proclaimed that the Gupta owned The New Age newspaper and the ANN7 news channel on MultiChoice's DStv satellite pay-TV platform are the only media telling government's "good" stories and that president's Jacob Zuma's "biggest crime" is that he has not dealt with South Africa's media monopolies.

Earlier this month in her budget speech in parliament, Faith Muthambi lashed out at South Africa's media, saying "to some media houses their main mission is simply to paint this government as corrupt, hapless and inept", warning that transformation of private print media ownership and the ownership of printing presses are on the cards.

Faith Muthambi, speaking as a panelist at the latest The New Age breakfast briefing in Sandton done in conjunction with the SABC and broadcast on SABC2's Morning Live,  had glowing praise for the SABC, ANN7 (DStv 405) and The New Age newspaper's good coverage and criticised other media who, according to her just want to scandalise "this black-led government".

"Given the current status quo - with regard to these big 4 mainstream media - they've taken a particular position towards government to say then what they're interested on, it is report on the scandals. The good thing that government that is doing they're not interested on reporting that," said Faith Muthambi.

Faith Muthambi also said this "problem" is an issue of private media ownership in South Africa.

"This black-led government, if its not scandalised, there is noting good that they are doing."

"There are people that of the view that [the Gupta owned] The New Age and ANN7 must be dealt away with. And I can say this the biggest crime this government led by president Zuma has done to deal with this monopolies."

"ANN7 and The New Age they are the only newspaper amongst a group that are able to report the positive thing that's government is doing. So for then, the private media ownership that becomes a problem."

"Now they are not able to reign, in terms of the consumption of the news. And then our people then they get empowered," said Faith Muthambi.

"We want to go to the offensive. It is time that we transform this sector. It's time. So that our people then have options. The right to choose. Unlike what they have been fed with all the time."

Faith Muthambi said "I think we have been talking a lot. It's time for action now".

"The 90% [local radio airplay] one also, that is the route. We are the policy makers.  We had to make sure that SABC does 90%. That should also come across when it comes to community media."

"I want to commend the SABC because through their 19 radio station at least people are able to be empowered, informed and then they're being educated, entertained, and also they understand the type of ... they need to take this or that."

Faith Muthambi reiterated that "we are going to go to the offensive now" and that "when it comes to ownership you see, you will find these black journalists that are there. But for them to progress to own, who own printing companies now?"

"It is time to transform this media industry," she said.

The billion rands project is years late and mired court battles, embarrassing scandals and confusion with South Africa that missed the internationally agreed to deadline of June 2015 to complete the switch-over process.

The government admits it doesn't have enough money to supply all poor families earning less than R3 200 with the government subsidised set-top boxes (STBs) TV households will need to keep watching the existing TV channels and planned new ones the SABC wants to start at a cost of R2 billion.

"As a department I think we have made inroads in make sure that the project moves within the very short space of time. So we shouldn't be focusing much on the delays," said Faith Muthambi.
on 1:54:00 PM