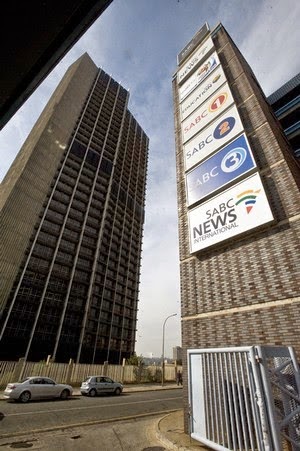 According to a shocking new internal SABC report from Sipho Masinga, the public broadcaster's aging emergency power generators are incapable of providing enough electricity for the SABC to maintain broadcasting of its signals during a power failure - a place supposedly designated a "national keypoint" in South Africa.

According to the report, it will cost the SABC at least R2 billion in infrastructure and technology investment to bring the beleaguered South African public broadcaster's technology and aging infrastructure up to date.

The SABC apparently blames Sipho Masingo for the blackout of the SABC's broadcasting signals.

Sipho Masinga's shocking report about the SABC's technology infrastructure follows the complete blackouts experienced in October when the SABC's three TV channels and radio stations unexpectedly went dark and were cut off.

The October blackouts of the SABC signals are the "second" time this year following a blackout in April this year due to equipment failure as well as back-up equipment failure.of MultiChoice's head-end equipment at the SABC's Auckland Park headquarters.

In multiple media enquiries made the past two months over the cause of the SABC blackouts by TV with Thinus, the SABC refused to say why it happened.

According to Rapport newspaper the blackouts occurred due to the power failures and the complete failure of emergency power generators at the SABC which didn't kick in and which wasn't working.

The problem is being worsened, according to Sipho Masinga's report and compounded by outdated and aging infrastructure and technology which is being used at the SABC which should have been replaced "years ago".

Sipho Masinga's scathing report states that "years and years of mismanagement" at the SABC is "responsible for the blackouts of SABC signals and that the "SABC's aging infrastructure is not being maintained in any of the nine provinces".

According to Sipho Masinga, the SABC has entirely failed the past 16 years to invest in the maintenance and improvement of existing infrastructure.

According to Sipho Masinga the public broadcaster is apparently not ready for the switch from analogue to digital broadcasting - something which requires an investment of millions of rand in infrastructure and technology.

According to Sipho Masinga's report "the situation is being worsened through the appointment of unqualified people which places a moratorium on the maintenance of existing infrastructure and investment in new technology".

Sipho Masinga also notes the shocking state of disrepair of the lifts at the SABC in his report, that "several of the SABC's buildings in the nine provinces are unsafe and falling apart", and that "most broadcast studios are totally outdated and shouldn't actually be used for broadcasting anymore".