BREAKING. SABC TAKEN TO COURT AGAIN! This time the SOS Coalition, MMA and the FXI challenge SABC appointments of CEO, COO and CFO. 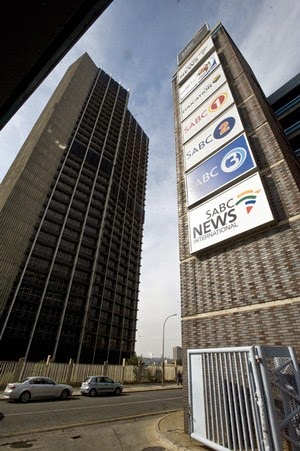 Something is rotten in the state of Denmark: The shocking number of times the beleaguered SABC and SABC executives have been taken to court in just 2014 just increased ...

... this time with the SOS: Support Public Coalition (SOS), Media Monitoring Africa (MMA) and the Freedom of Expression Institute (FXI) who filed on Friday, taking the SABC, the SABC's famously matricless chief operating officer (COO) Hlaudi Motsoeneng, and the minister of communications, Faith Muthambi to court.

SOS: Support Public Coalition (SOS), Media Monitoring Africa (MMA) and the Freedom of Expression Institute (FXI) are taking the SABC, Hlaudi Motsoeneng and Faith Muthambi to court and are challenging the process followed in the appointment of the SABC's CEO, COO and chief financial officer (CFO).

The groups lodged their joint application in the North Gauteng High Court on Friday.

Then there is the recalcitrant SABC chairperson Ellen Zandile Tshabalala - exposed for lying about and not having the tertiary qualifications from UNISA she claimed to have had - using court action to try and stave off a parliamentary inquiry into her fake qualifications which could see her be removed from the position.