SABC furious over hilarious 'sabotage' notification in Auckland Park's old and broken lifts; explains why its First Citizens have to wait for a ride to the top. 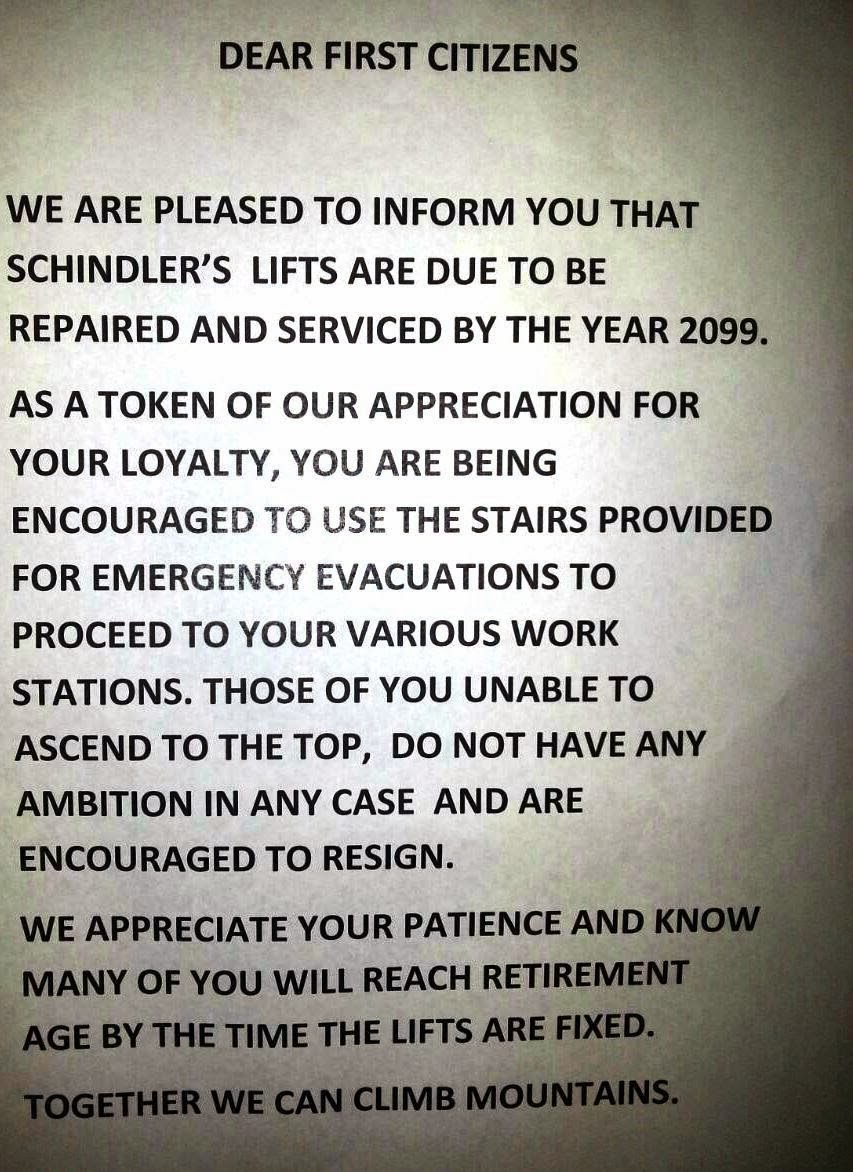 The SABC is furious over an unauthorised message from a Fawlty Towers employee which it calls "an act of sabotage" - a notification which an SABC staff put up in the South African public broadcaster's decrepit lifts and which many employees didn't realise was a joke - to great hilarity of others.

With most of the SABC's lifts and escalators that's over 40 years old and in many instances falling apart and often breaking down, staff tell TV with Thinus that personnel often "wait up to 10 minutes for a lift".

"SABC lifts inside Auckland Park often are often not working, with out of order lifts leading to big frustration," quipped an insider. "At least there's still some people with a sense of humor at Fawlty Towers," said one.

Recently an SABC staff member put up the notice above inside an SABC lift, properly addressing SABC employees and lift users as "First Citizens" - exactly how the SABC address its staff.

"We are pleased to inform you that Schindler's Lifts are due to be repaired and serviced by the year 2099," says the "notice" which some SABC staff mistook for the real thing.

"As a token of our appreciation for your loyalty, you are being encouraged to use the stairs provided for emergency evacuations to proceed to your various work stations".

"Those of you unable to ascend to the top,do not have any ambition in any case and are encouraged to resign," the fake notification told SABC staff.

In the internal news letter to staff, a copy of which TV with Thinus obtained, the SABC addresses the lift humour, calls it an "act of sabotage" and threatens the Park's first citizen responsible for the dastardly deed with disciplinary action.

"We are currently experiencing an abnormal amount of lift outages at this time and as First Citizen you are requested to be patient. The situation is getting a necessary intervention," the public broadcaster informed its "citizens".

The SABC powers that be requested its first citizens to please report lift problems "in and around their work" as soon as they become aware of them. It's important to get a reference number which must be kept for all future references.

"We are aware of an earlier unauthorised message sent to create confusion. Management regards this message as an act of sabotage and anyone found to have made such remarks will be liable to a disciplinary action".
on 8:39:00 AM