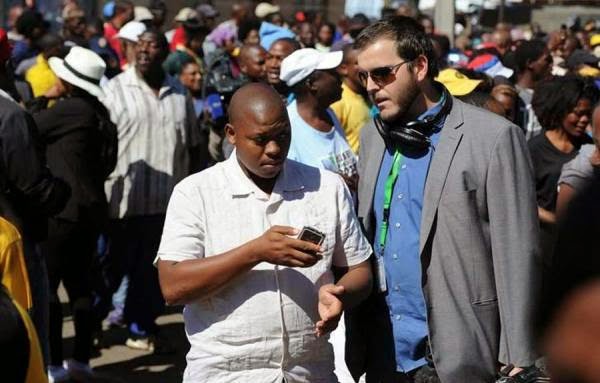 The eNCA (DStv 403) reporter Nickolaus Bauer was harassed today by the South African Police who forcibly took his cellphone and deleted images off of the TV journalist's cellphone at an ANC election rally in Duduza that the 24-hour TV news channel was covering.

Nickolaus Bauer was harassed by a South African Police member, dressed in plain clothes, as other journalists and cameramen looked on.

Nickolaus Bauer's phone was forcibly taken and photos he took deleted by the South African policeman who apparently works for the VIP division.

The police man didn't want Nickolaus Bauer to take and have photos of a Gauteng government vehicle used to transport ANC T-shirts for the election rally - a state vehicle which means it is an abuse of state resources to do this for a specific political party.

e.tv and eNCA didn't respond to a media enquiry made before close of day on Friday seeking comment,a response or a statement from the 24-hour TV news channel on Friday's incident.