SOS Coalition holding a meeting on 7 March to try and save the 'dying' SABC; SABC 'lacks credibility, culture of censorship taking hold'. 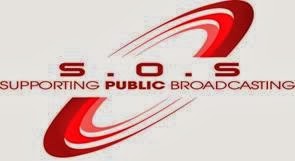 The SOS Coalition, a civil society pressure group looking out for public broadcasting in South Africa, will be holding a mass meeting for the public on 7 March at Constitution Hill in Braamfontein to try and save the "dying" SABC from censorship, political interference and maladministration.

The SOS Coalition, a vast group representing major groupings from academics to trade groups and the South African TV and film producing sectors, was established in 2009 when the SABC came to the brink of financial collapse due to gross mismanagement.

"In 1994 we were building an SABC we could be proud of. Today our SABC is, yet again, unfree," says the SOS Coalition. "We are being denied an independent, credible and people-driven public broadcaster," says the group which is planning a mass meeting on 7 March at Constitition Hill (number 4 and 5) from 14:00 to 17:00. Anyone is free to attend.

The SOS Coalition will try to seek a course of action as to what is to be done. "Why is our SABC falling apart? Who benefits from a dysfunctional SABC?" asks the group. "We, the people, must act radically, and act now. Unspeakable bad maladministration is killing our public broadcaster".

Last year the entire SABC board resigned after intense infighting to be replaced with yet another new SABC board.

Just this year the SABC CEO Lulama Mokhobo quit barely two years into her five year contract without giving any reasons and becoming yet another CEO in and out in a revolving door of CEO's at the SABC fingered for maladministration.

PricewaterhouseCoopers (PwC) released an independent and scathing skills audit report of the SABC which found SABC workers and executives lack critical thinking and found fraudulent and non-existing qualifcations and certificates and that a lot of SABC workers don't even have personnel files.

Then the Public Protector released a shocking report into abuse of power, irregularities and maladministration at the SABC.

The Public Protector's investigation of over a year found that the matricless liar and acting chief operating officer Hlaudi Motsoeneng admitted in a recorded interview to having committed fraud by claiming he had a matric certificate and that he made up symbols, and implicated him in irregular hirings and firings at the SABC, such as the firing of all the people who were involved in an earlier disciplinary hearing against him.

The Public Protector also questioned how Hlaudi Motsoeneng's salary grew multiple times per year. He currently gets a salary of R2.4 million.

The Special Investigative Unit (SIU) last week detailed in parliament further details of corruption, mismanagement and wasteful and irregular spending of more than R275 million at the SABC.

"The SABC lacks credibility," the independent and veteran broadcasting expert and researcher Kate Skinner tells TV with Thinus. "It isn't sufficiently trusted. This is worrying in an election year when people particularly need to get credible, balanced professional news and current affairs programming".

"Our public broadcasting post-1994 was excellent. There was a lot of excellent content but sadly this has deteriorated due to political interference and mismanagement of the institution. There have been significant financial crises, particular in 2008 and 2009".

"A culture of censorship and fear is beginning to take hold at the SABC," says Kate Skinner. "Journalists are not taking risks and pushing boundaries."

"Everyone always talks about the BBC but there is also the very powerful Japanese public broadcaster NHK that produces some excellent public service programming. It has done some innovative work with citizen journalism including citizen inserts at the end of its news broadcasts".

"Swedish public radio year after year is voted the most trusted institution, above parliament and the courts, in Sweden. It produces excellent distinctive programming catering for regional interests and dialects".

"Some public broadcasters however in Eastern Europe have started to shift back to being state broadcasters. We are seeing that in South Africa."