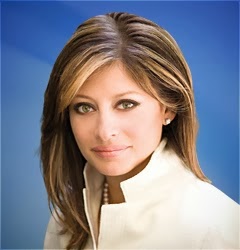 Maria Bartiromo who left CNBC and CNBC Africa (DStv 410) at the end of November 2013 to join Fox Business Network in the United States, has officially signed with Fox and will reappear on South African television screens before the end of March when she starts anchoring a brand-new Sunday business show on Fox News Channel (StarSat 405).

Maria Bartiromo will now be global markets editor, and will do a daily market hours programme for Fox Business Network, a TV channel South African viewers don't get to see since it's not available on MultiChoice's DStv nor On Digital Media's StarSat.

In addition to her daily show on FBN, Maria Bartiromo will however also do a Sunday business show for sister channel Fox News Channel as TV with Thinus reported in November, and which is shown in South Africa on StarSat.

"Fox Business Network has signed veteran financial anchor Maria Bartiromo to a multi-year deal," annouced Roger Ailes, the chairman and CEO of Fox News in a press statement. "She will begin her tenure at Fox Business Network on 1 February with each programme launching before the end of the first quarter".
on 8:17:00 PM