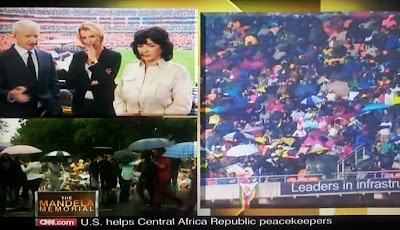 Millions of South Africans watching - as well as many millions more tuning in around the world, saw Nelson Mandela's televised memorial service at the FNB Stadium marred by not just a late start but also video and sound problems from the TV feed delivered to all broadcasters by the SABC.

Nelson Mandela's memorial service at the FNB Stadium in Johannesburg was supposed to start at 11:00 but with a stadium more than half empty due to logistical problems and rain, the ceremony only got underway at 12:00.

The ceremony started with none of the American presidents yet in attendance, while foreign dignitaries, other notable guests and ordinary South Africans still arrived and filed into the stadium long after 11:00.

"Clearly this is not going to be starting on time," said Anderson Cooper on CNN International (DStv 401) as TV news broadcasters like the BBC World News and eNCA switched to coverage from their respective media boxes at the Stadium. SABC News and ANN7 also had roving reporters in the stadium.

There was no indication of why American president Barack Obama and other American notable guests were no-shows when the memorial service started and why they were late.

CNN International for instance apologised to viewers for the visual and audio quality which included erratic roving shots of dignitaries arriving and strange stadium shots of visitors.

Viewers saw bad angles, got open audio and heard things like handlers shouting at the media to "move, move" when heads of state arrived, coupled with bad video and sound on television throughout the memorial service and the various speeches and songs.

Cooper told viewers that it's a pool camera feed which CNN International had to use and over which CNN had no control. The same video feed was seen on the other TV news channels.

"This is a pool camera being controlled elsewhere. We're not controlling the shots. If you're wondering why we're showing you particular shots - we're not in control of this," Cooper told viewers.

"We're haven't been showing you all of the speeches because frankly there's a lot of audio issues and video issues as well. This is a pool camera. This is not our camera. So we've been dipping in and out whenever possible," said Cooper.

Co-anchor Christiane Amanpour on CNN International remarked that it was difficult to at times actually see the foreign dignitaries and to identify them to viewers. This was due to bad camerawork and bad angles and the camera not zooming in far enough.

"It would be great if the sound was worked out a bit better," said CNN International's Robyn Curnow.
on 1:09:00 PM