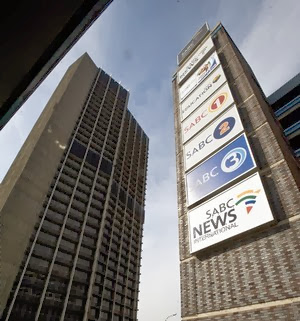 Scores of people including civil society groups publicly protested at the SABC's Auckland Park headquarters in Johannesburg on Thursday afternoon, outraged and angry over growing perceptions of rampant censorship at the South African public broadcaster and skewed editorial practice silencing opposition and criticism of the South African government.

"We are gathered out of a sense of outrage. We gathered out of desperation," said the SOS Coalition group, a bradbased representative umbrella organisation representing vast spheres of the local TV industry groups and civil society.

"We are gathered in the shared battle for the soul of the SABC and a robust, representative and free media in South Africa," said the SOS Coalition.

People gathered with placard which read: "Bring back Big Debate. Free the SABC" and "Free the SABC. Stop State interference".

When the SABC decided to can The Big Debate last week, it canned a programme which reflected the lived experiences of ordinary people in South Africa," said the SOS Coalition.

"We are not against the SABC, we love the SABC as the public broadcaster, but we are against political influence over programming, which is what we believe is happening," said the Right2Know organisation, another civil society pressure group.

"It's not just about The Big Debate - it was the trigger. The latest trigger that raised issues fundamentally outside The Big Debate of the independence of the public broadcaster from political manipulation and influence," said R2K.

"The SABC routinely silences programming which is critical of the South African government's failings," says the SOS Coalition. "It also routinely does this on the basis of obscured readings of the editorial policies."


ALSO READ: 'It's bizarre': SABC News literally wastes time on showing bull(sh*t), instead of covering real news like the protest at the SABC.
on 10:14:00 AM