Public protest coming this Thursday at the SABC over the broadcaster's ongoing censorship and canning of The Big Debate on SABC2. 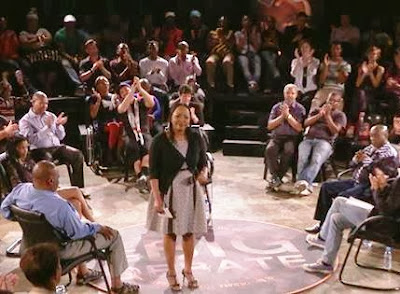 The SABC's famously matricless acting chief operating officer Hlaudi Motsoeneng ordered The Big Debate on SABC2 with executive producer Dan Cashdan off the air just before its second season was supposed to start which has already filmed 4 episodes, as well as pulling all the repeats of the first season.

The SABC says The Big Debate "compromised the SABC newsroom" since the show was "incorrectly commissioned".

"In protest at the continuing censorship and lack of editorial independence at the SABC, as well as the canning of The Big Debate, we are issuing a public call to protest for this Thursday 24 October from 12:00 to 14:00 outside the SABC in Auckland Park," says the R2Know Campaign in a statement.

"The South African public are fed a diet of cheap American sitcoms, aspirational soap operas and poor quality foreign programming in part because of the perennial underfunding and financial mismanagement at the SABC," says the Right2Know Campaign. "The Big Debate is a massively popular exception to this that gives South Africans a taste of what a true public broadcaster can deliver."

Public pressure organisations and industry watch groups focusing on public broadcasting in South Africa are incensed at the SABC and the ongoing highly-embarrassing financial, management and editorial dramas which plague the struggling broadcaster.

"We do not want skewed and biased sunshine journalism from our public broadcaster – we want real journalism," says William Bird, director of Media Monitoring Africa MMA). "This really is an extraordinary decision especially given how the SABC's group CEO Lulama Mokhobo spoke so warmly and positively about The Big Debate."

"It would appear that the SABC wants to insource current affairs because the programme producers are too independently-minded for the broadcaster, and they have developed cold feet with a national election looming," says the Right2Know Campaign.

"The SABC's canning of The Big Debate smacks of political censorship and an abuse of the public broadcaster to protect certain individuals' political interests. In its first season of 10 episodes The Big Debate offered viewers high quality programming and deep level debates on various current affairs pertinent to South Africa."

"This has happened as the SABC is on a nationwide roadshow to ensure public participation in the review of editorial policies. The decision flies in the face of the current and draft policies which both commit the public broadcaster to reflect the diverse range of South African attitudes and opinions."

"The SABC is being dragged back to the days when it was a state broadcaster practicing political censorship ahead of the public's right to know," says the Right2Know Campaign.

Meanwhile the former intelligence minister Ronnie Kasrils has called on South African journalists to question the so-called Secrecy Bill and to report on it insightfully. The Secrecy Bill aims to hamper journalists reporting on various matters with the interest of the state weighing heavier than freedom of expression.

Ronnie Kasrils who spoke at a Media Freedom Day Event at Wits University said South African journalists have to question the Secrecy Bill and investigate all the implications.
on 10:51:00 AM