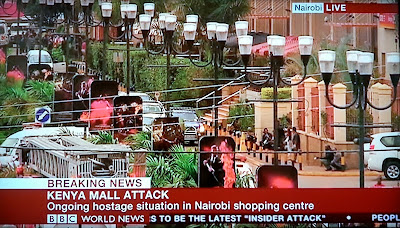 While BBC World News, CNN International, Sky News and eNCA immediately went to reporters and freelance reporters based in Kenya and South Africa for commentary, analysis and live reporting, ANN7 and SABC News instantly showed how unable they are in really are as so-called 24-hour TV channels in South Africa to cover important and developing big news stories in Africa. 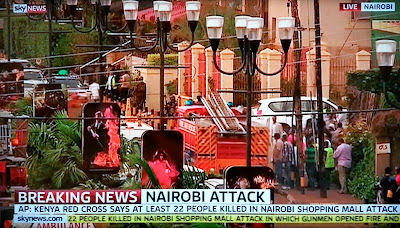 The closest viewers would get to seeing any Kenya hostage drama news on ANN7 would have been to look closely at the TV monitor wall in the background where ANN7 control room personnel watched CNN International and Al Jazeera. 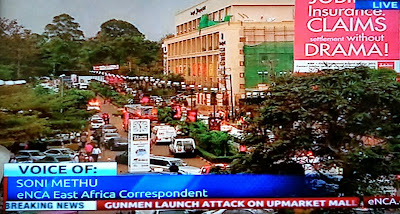 SABC News, like ANN7 didn't cover the story at all for hours, as the other TV news channels instantly started to bring news out of Kenya.

SABC News started covering the story at 16:30 with a report, but the package didn't want to play after which the news reader also fumbled the numbers of the dead.

At 17:00 ANN7 finally kicked in with a terribly done story (and again, as usual, a news reader struggling to read). SABC News at 17:00 lead with a story on taped story on tuberculosis in the Eastern Cape as all the other news channels were covering the stand-off in Kenya.

It's embarrassing that Africa News Network 7 and SABC News are African and South African 24-hour TV news networks and come across and look blatantly amateur when non-covering major news events on African soil, when overseas and international TV news channels do - and much better.
on 4:45:00 PM