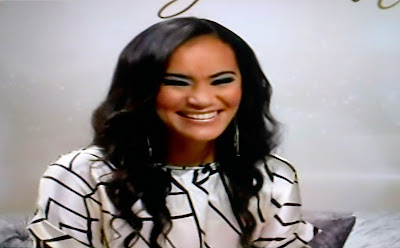 Jo-Ann Strauss now fronting her own primetime talk show on e.tv, Glambition on Mondays, is smiling to camera - she's been tele-trained that way. But she's also probably smiling for another less known reason: I can reveal that Glambition as her break-out TV venture is now the 3th most watched TV talk show on South African television.

With virtually no pre-launch publicity support from e.tv and basically zilch in terms of ongoing publicity support from the channel, the weekly Glambition, from Spaghetti Meatballs Productions, executive produced by Jo-Ann Strauss, Mike Varalla and Gerry Jennings is racking up a respectable viewership of around 340 000 viewers.

Glambition is only outnumbered by Motswako (SABC2) and Three Talk with Noeleen (SABC3) in the talk show genre - both co-incidentally also female-skewed and female presented talk shows.

Since it's launch a few weeks ago on e.tv, Glambition has consistenly ranked as the 3rd largest talk show in terms of audience on South African television every week - one episode surpassed the 600 000 audience mark.

The talker centered around topics of health and beauty pulls close to similar numbers of an international reality show such as Skin Deep on e.tv about cosmetic procedures.

Jo-Ann Strauss left SABC3's Top Billing where she was a TV brand name as one of the revolving corps of telegenic presenters, to try her hand at her own local TV foray in a format playing to her strengths and experience as a sought-after South African MC and public speaker and globe-travelled media maven.
on 12:22:00 AM