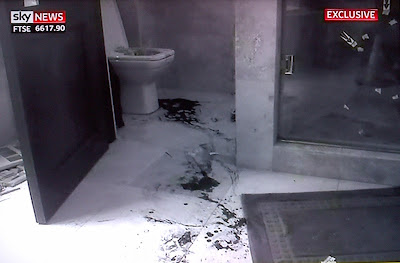 Sky News (DStv 402) is the to-tune-to 24-hour news channel of the day today with a massive exclusive: stark blood-filled black-and-white images of the death scene where the paralympic South African Oscar Pistorius shot and killed his girlfriend Reeva Steenkamp earlier this year.

Ironically Team Oscar most probably didn't know, and never could have anticipated, that the exclusive interviews with Oscar's uncle and Oscar's agent on CNN International would be running on the same day and at the same time as Sky News is splashing its huge TV exclusive of gory images taken by police of the scene where gruesome shots rang out from Oscar Pistorius' weapon who has now been charged with murder.

Add to that the new splashy tawdry tabloid coverage from South Africa's biggest tabloid weekly magazine which ramped and hyped up its Oscar Pistorius Reeva Steenkamp melodrama again in the latest issue out again today.

Sky News isn't specifying where it got the images of Alex Crawford's story. "Sky News has obtained exclusive pictures from inside the home of the paralympic medalist Oscar Pistorius including of the blood-stained bathroom where he shot his girlfriend Reeva Steenkamp," is how Sky News prefaces its exclusive today.
on 5:02:00 PM