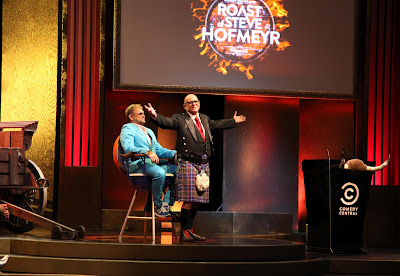 The first South African and African "roast" of a South African personality, the Comedy Central Roast of Steve Hofmeyr on Comedy Central (DStv 122) was an event filled with extremely nervous laughter from nervous and posturing comedians, and more hype than actual funny comedians. At least it is a first try at something new for South African television.

The roast hosted by Trevor Noah was executive produced by Lydia Mason and most of the participants came across as too nervous (and perhaps uneducated) as to what they were supposed to do. Did all of them watch the American version before they were presumably paid to be a part of this production?

Trevor Noah laughing at his own jokes initially was bad (but he got a little bit better), although his impromptu delivery of jokes made up on the spot later were zingers.

Anele Mdoda (who wasn't funny at all with erratic arm, hand and body movements) and the utterly terrible Minki van der Westhuizen (who read haltingly, like reading a storybook to a three year old) didn't belong. Both seriously looked and sounded out of place. (Why were they included?)

Shaleen Surtie-Richards sat through the whole broadcast looking highly disdainful of everyone and everything, making it clear she's not amused and looking as if she didn't want to be there. Only to in the end lash out inappropriately at everyone.

The overly dramatic and pedantic roasting from Robert Whitehead who was first (and sashayed to the podium in a Scottish kilt) was painfully awkward to listen to. It was also too long. As he nervously made his way through his speech he came across as the drunk brother-in-law at the wedding who's not good at public speaking and an embarrassement to himself, who gets asked to do a speech. It was painful to see.

Kuli Roberts following him was distracting with her erratic, hunched delivery, and also came across as nervous; constantly touching her clothes and hair.

The "most famous nobody in South Africa" John Vlismas also started off with nervous laughter, although his delivery following Robert Whitehead and Kuli Roberts was the first clear and good comedically timed stand-up monologue of the broadcast. Sadly he also laughed at his own jokes during his own delivery.

David Kau - also filled with highly nervous laughter - summed it up well: "I'm gathered here with a bunch of South Africans; that are trying to do some sh*t they saw on American TV."

The comedic timing, extremely sharp and on-point jabs, self-assuredness, and straight-forward extreme zingers delivered by Casper De Vries - who didn't shy away from completely going for the jugular - largely helped to save this made-for-TV event.

To John Vlismas he said: "Your existence is proof that Satan f*cks rats". And to Kuli Roberts: "Except for Oscar Pistorius and myself, who haven't you f-?"

And to Shaleen-Surtie Richards: "I saw you on television the other day. But I was mistaken. My glasses was off, so I put on my glasses and it was a news item about a whale that tried to get back into the sea..." And to Steve: "The first time I heard you I thought: Is this an old lesbian with throat cancer?" and "You threw tea in the face of the editor of Huisgenoot. That's the first time you left a woman not wet inside but on top.")

Shaleen Surtie-Richards and her clearly serious anger outburst aimed at the audience, the other roasters and then with venomous remarks to Kuli Roberts was inappropriate for what the format of this show is. Back after her mild stroke, her performance was uncomfortable to watch and detracted from the show. Why was this kept in this TV production if its not suitable - the show was already long enough time-wise?

The stage design of the Comedy Central Roast of Steve Hofmeyr (and inbued with circular themes and an ox wagon) was well done but came across sparse compared to the American roast episodes the comedy channel has been inundating viewers with over the past few months, creating a visual benchmark for how roast sets are "supposed" to look.

Sociologically the broadcast was funny - the first time that white, coloured and black South African personalities laid into each other on television under the banner of comedy, with a live studio audience in attendance.

Comedy Central would be served well by tighter editing in the future of future roasts. And don't do audience shots in which people are clearly visible who are engaged with their cellphones and blue screens which give an impression of them being disinterested.

Roasters should also be more appropriately chosen, although the American roasts often suffer from the same debilitating effect in being unable to secure appropriate comedic talent.

The Comedy Central Roast of Steve Hofmeyr made a good decision in Steve Hofmeyr as an appropriate candidate, but like Donald Trump he "won" (and they're not supposed to).

The too many references and side jokes to Kuli Roberts also made it look as if it was a roast of her - good television requires good editing and knowing what to leave out. With too many nervous comedians and too much left in, the first African roast diluted the tight on-screen impact on television it could have had.
on 11:17:00 PM