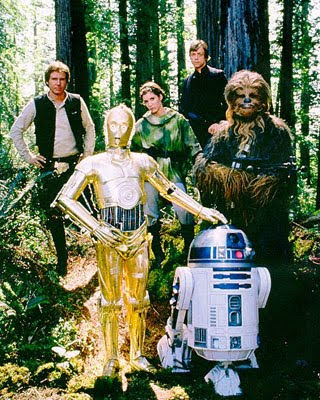 ALSO READ: New Star Wars TV live action show may be too vast and expensive for even George Lucas to bring to television.

George Lucas wants to make the live action TV show to look just like the movies, but since it's set in his sprawling galaxy a long time ago and far, far away, the project is prohibitively expensive for Lucasfilm. The new TV drama is set in the same timeframe as the animated Star Wars The Clone Wars currently in its 3rd season on The Cartoon Network. This second TV show also set within the mythos of Star Wars, is supposed to follow after Star Wars The Clone Wars and will be set between the end of The Revenge of the Sith and the beginning of A New Hope.

''We're looking for a different technology to use, something economically feasible to shoot the show,'' George Lucas said on the TV channel G4's Attack of the Show. ''Right now, it looks like the Star Wars features. We just have to figure out a way of making it at a tenth of the cost of the feature, because it's television.''

''We have 50 hours [of scripts] and we're just waiting to figure out a different way of making movies, a different technology we can use ... to make it feasible to shoot the show... When we do figure this problem out it will dramatically affect a lot of movies. Right now it [the new TV show] looks like the Star Wars features,'' George Lucas said.
on 10:21:00 PM