BREAKING. Al Jazeera demands an end to Egyptian interference in coverage after being cut from Nilesat; bureau's telephones cut. 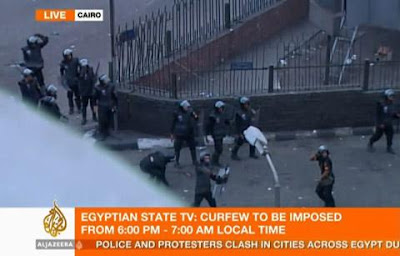 In a strongly worded press release I just got from the Arabic news channel Al Jazeera (TopTV 401 / DStv 406) the news channel is calling for an end to the interference by the Egyptian government that's trying to block Al Jazeera's news reporting from the country under siege, and in the grip of a populist revolt against the regime of Hosni Mubarak.

Al Jazeera who lead coverage about the Tunisian uprising earlier this month and now doing the same in Egypt with excellent reporting, says its signal was this morning cut from the satellite operator Nilesat.

''Al Jazeera has called for the Egyptian authorities to allow them to freely cover the events currently unfolding in the country,'' says the news channel that says their live channel Al Jazeera Mubasher ''was this morning removed from the Nilesat platform from which the public receive television channels.''

''In addition, Al Jazeera's bureau in Cairo had its telephone landlines cut, and its main Arabic news channel has also faced signal interference.''

"We call upon the Egyptian authorities to uphold the right of the media to report news freely,'' says Ayman Jaballah, the managing director of Al Jazeera Mubasher. ''There should be no impediments or restrictions in front of a free press." Al Jazeera's coverage of anti-government demonstrations has previously faced censure from regimes, most notably earlier this month in Tunisia where the channel was banned by the former president. Despite this, Al Jazeera continued to report on the uprisings, to widespread acclaim.
on 10:06:00 PM