BREAKING. Binneland Sub Judice flatlines on M-Net: soap's law world gets dumped, show back to half an hour when it goes to kykNET. 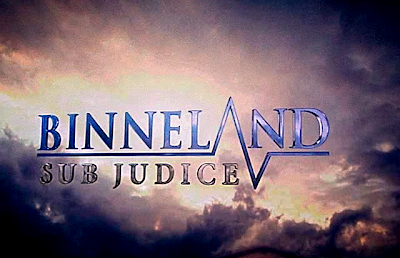 Binneland Sub Judice is flatlining on M-Net with the broadcaster that's decided to get rid of the last soapie left on its schedule after Egoli got canned in April.  Binneland Sub Judice will live on on kykNET (DStv 111) but like any thorough lobotomy the failed upsized soap will be half of what it's now. I've got all the details and the news, and can bring you the reaction - straight from the set - first.

Binneland Sub Judice will completely drop the new legal universe that was added in April this year when Binnelanders changed to Binneland Sub Judice and expanded from half an hour to an hour. The soap that will now share schedule space on kykNET (that already has Villa Rosa) will go back to only being half an hour. The name will probably change back to just Binnelanders sources tell me exclusively. ''The cut-and-thrust legal universe, which was introduced earlier this year . . . will not form part of the half hour kykNET soap as of April next year,'' says M-Net that's putting a stake into Binneland Sub Judice less than five months after viewers saw the show being supersized.

I heard rumours about M-Net's turn-around and wanting to get rid of Binnelanders Sub Judice a while ago, but nobody wanted to talk about it. When Binnelanders Sub Judice moves to M-Net in April 2011 it will be exactly a year after Egoli had that ridiculous anti-climactic Louwna-at-the-bottom-of-the-staircase final episode. ''The changes to Binneland Sub Judice form part of M-Net's long-term strategy to create tailor-made channels for different target audiences on different platforms,'' says Theo Erasmus, director of M-Net's general entertainment channels. ''In the fast changing world of television, it's important to research the needs of viewers constantly, and to nip and tuck our channel and programme offerings accordingly,'' he says. That means that the Binneland Sub Judice attempt failed and that M-Net is getting rid of it.
It's somewhat confusing in a technical broadcast way, but I'll tell you anyway: the few thousand M-Net subscribers who are analogue viewers (i.e. watching M-Net on an analogue decoder and not as a DStv channel, will still be able to see Binneland Sub Judice or Binnelanders after April next year. The ''real'' M-Net (DStv 101) will fill the hour with a new soap or other fare, while the show will be broadcast separately to the analogue decoders.

I can exclusively reveal that the Binneland Sub Judice cast and crew were informed yesterday that they're moving to kykNET and that the soap will go back to half an hour. I can also tell you that behind the scenes the producers have been struggling (although I don't mean struggle as in a bad way) to try and successfully integrate the new legal universe with the existing hospital universe. They also struggled with the pacing of the soap that suddenly expanded to an hour, so some of the news are actually a relieve at the new Stark Studios where Binneland Sub Judice is being shot. I can also tell you that there is still hope for the failed Sub Judice half. On set sources tell me that by latest October they will know the fate of the other half - which could be developed into a whole new show on either M-Net (a second attempt just focusing on the legal world) or kykNET (doubtful).


''The show going out won't change too much with the move to kykNET,'' a set source told me earlier today. ''We'll go back to the Binnelanders we were before Binneland Sub Judice,'' another one said. ''The biggest change will probably be that we'll be able to finish by four in the afternoon instead of seven,'' said a third on set tipster. ''People on set are too busy to really think about what we're thinking about this. The announcement didn't create any kind of uproar amongst members of the cast or crew. Nobody is unhappy. There shouldn't be major script changes either. At the end of the day it will all be fine,'' I was told.