Programming note: Shark Month is back on Animal Planet with new first-run documentaries in August. 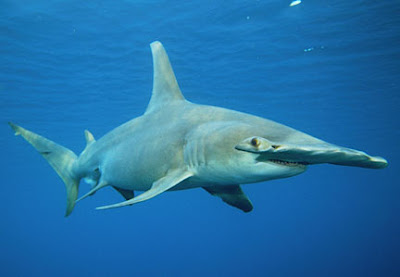 Animal Planet's Shark Month theme actually perfectly ''co-incides'' with Shark Week on the Discovery Channel in America (of which the international Animal Planet is a sister channel that has been ''exporting'' the successful shark week theme to a global TV audience the past few years.)

This year Animal Planet will premiere a new exclusive series of shark documentaries including Ultimate Air Jaws on August 4 that gives further breath-taking insight into the South African great white sharks that jump from the water to attack their seal prey. Other shows in August on Animal Planet include Great White Appetite, Deadly Waters, Shark Rampage 1916, Day of the Shark 2 and Shark Bait Beach.

If you want to know more about these individual shows, click on READ MORE below for a synopsis and their specific broadcast dates.


Shark Month on Animal Planet (DStv 264) has some fascinating underwater footage (is there really any other kind with sharks?), graphic reconstructions and amazing survival accounts from the mysterious underwater world of these feared creatures from the deep. Here's a few highlights in the month ahead: 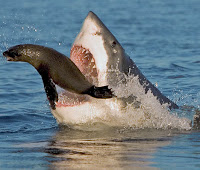 Great White Appetite
2 August, 20:05
Of course the famous ocean predator is the Great White shark. What in all the ocean is feared more? This ancient breed is found along the shores of more than 50% of the world's inhabited coastlines - yet we as humans know almost nothing about it. Scientists still don't have accurate data on the Great White's population, mating practices, travelling patterns or even what drives its feeding behaviour. The former marine Charles Ingram travels the globe with shark experts and stops at three major Great White feeding grounds to discover the answers to these and other fascinating questions.

Shark Rampage 1916
2 August, 21:00
Learn about the shark attacks that inspired the famous movie Jaws. In the summer of 1916, just off the shore of New Jersey in America, one of the ocean's deadliest predators hunted humans. The multiple attacks, a first in America's history, went on to cause a century of panic. Discover what triggers sharks to attack as actors recreate the dramatic events, bringing to life the events that ignited our fear of sharks.

Deadly Waters
3 August, 20:05
Adventurer Les Stroud travels to five oceans across the globe in order to find out what makes the waters so dangerous. Shark attacks can occur when humans encroach on these animals' territories. Divers and swimmers fall victim when they unknowingly plunge into baited waters infested with several varieties of shark. By conducting a series of immersive tests, Les demonstrates the importance of understanding what makes some locations areas to avoid. In each case, he puts his life on the line getting up close to understand the behaviour of these creatures lurking beneath the water.

Ultimate Air Jaws
4 August, 20:05
Get a truly breath-taking insight into the behaviour of the Great White shark. Ten years ago, a new development was witnessed for the first time - to catch an elusive seal, a Great White showed remarkable power when it launched itself above the water. Now, another discovery has been made showing that, in spring, sharks migrate and head towards the mainland. The reason for this is not fully understood. Shark expert Chris Fallows will try to shed light on this mystery by documenting the shark's migration off the coast of South Africa. He will also use innovative filming methods to get incredible footage of aerial shark attacks on seals.

Day of the Shark 2
7 August, 21:00
This documentary uncovers the science behind shark attacks. What puts a shark into attack mode at certain times of the day? What rules should humans follow to avoid an attack? It is morning when a Great White shark smashes into a cage, trapping two filmmakers. At midday, a man watches as his young cousin is ripped off her surfboard and taken under water by a two-thousand pound shark. Take a trip into the brain of the shark: how they control the oceans, how they use their formidable senses to home in on their prey, and how a visitor in the shark's domain can avoid being in the cross hairs of the most feared predators in the sea.

Shark Bait Beach
8 August, 21:00
This show returns to the site of the attacks to recreate the dramatic stories of survival and search for clues that might explain why sharks mistook humans for prey in a fateful summer.
on 11:42:00 AM