INTERVIEW. Producer Paul Venter on All Access turning one: ''We just want to do what we do even better.''

All Access on M-Net, the weekly entertainment magazine show Fridays at 19:30 just turned one since its high gloss debut last June on the pay broadcaster. In a comprehensive interview I spoke with All Access producer Paul Venter from Homebrew Films about the show's success, how All Access decides what makes it to air (and what not), as well as the logistical challenges of putting together such a show on a weekly basis behind the scenes.

Paul Venter talks about some of the difficulties All Access faced in the first few months and how it changed and reveals how the show keeps working to get international access to TV shows and celebrities. See what All Access insert of the past year he calls ''just magical'', what he says he enjoys the most about his work and how as a producer of the show he sees All Access moving forward. 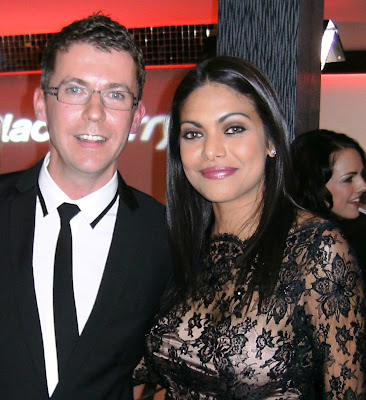 Paul Venter, All Access producer with Tammy-Anne Fortuin, All Access producer and presenter at the first birthday party of the weekly entertainment magazine show on M-Net.
What do you think contributes to the success of All Access as an entertainment magazine show, now celebrating its first birthday on M-Net?
I think its a unique combination of first of all M-Net - we get such great support from M-Net's side, they have the best shows and series that have so much hot stars and celebrities you can interview and press junkets that's available - together with the fact that also for the first time, we can also showcase local talent and stars - from upcoming new talent to the local greats in the entertainment industry.

How do you decide on a weekly basis what goes into the mix of a particular week's hour of All Access? I think a lot of viewers will think of an hour as maybe longform television, but actually its very short for the amount of celebrity news, profiles and glamour there is available on any given moment to showcase.
We have six inserts every week. We've got a recipe. So we know exactly - I'm not going to reveal the recipe! and we tick them off: We have to have these things every week, just like a magazine. You've got to have your cover story, you have something for people loving celebrity and then something more profile and in depth.

Obviously All Access is a high gloss entertainment magazine show, its about the best stars, best access to events and celebrities but it comes with a high behind the scenes ''price'' of logistics, media management between talent and agencies and PR and travel arrangements. And often at short notice. Can you tell me a bit of how close you get to clinching a story or insert and then getting it on air a day later.
One of the challenges is that we're based in Cape Town. So it has happened that on a Friday morning we've put people on a plane at six o clock to fly to M-Net to hand deliver an insert. But once again kudos to M-Net, since they're willing to move the programme delivery time to the very last in order to get that scoop and get that story. But its part of the fun. Its nice to be able to do that. Its the adrenalin of getting the scoop and you just have to make it. You work through the night, the editors are sitting doing their thing.

And getting the access for All Access to A listers and A level celebrity events? How far has All Access come in the process of establishing itself as a brand that celebrities know and trust and seek out when it comes to entertainment magazine television coverage?
We felt it in the first three months since we started. People were like: ''Yes, but we're fielding other TV and media offers as well.'' Then, literally after we were on the air for six months, people started calling us at All Access wanting to be on the show. Then we suddenly felt we're switching over from second gear to fifth gear. Suddenly we could start to choose more out of stories. It's amazing. Suddenly we're recognized and we can choose, and we don't have to explain who we are and what we do and what channel we're on.

The international access - having done and doing it myself and knowing how hard that is to get going and then keep up - All Access is phenomenal. A lot of people would see somebody interview an international celebrity or do an American TV show set visit and not realize how much work went into that behind the scenes to get to that point. It's so tricky and not just about ''lets go to Hollywood and talk to somebody''. How difficult was it to establish that kind of access for All Access?
Once again M-Net and Jan du Plessis at M-Net who does the buying of shows, he just opened amazing, amazing doors for us. He buys TV shows from Disney ABC and Fox and HBO and everybody so we compiled stuff and sent it to them to introduce us and that opened the doors. Always for the first time you have to talk very nicely and ask very nicely. Then, when they've seen the insert, then the invites and offers start coming in. Then they see you're not there to make them look bad but you're there to support them. We want to show the good and nice stuff and celebrate what they're doing on television. 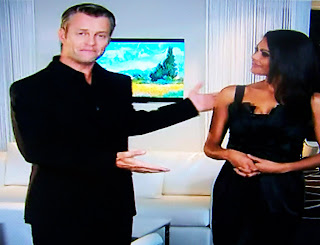 All Access presenters Mark Bayly and Tammy-Anne Fortuin.
What do you enjoy the most about your work? What is some of the best inserts you've had a hand in so far getting on the air for All Access in the past year?
Its so funny, its not necessarily the international inserts its the local content. When those local inserts work its wonderful. Soon we'll have an insert with Overtone which we did and its phenomenal. There was an insert with Mark Bayly and Shaleen Surtie-Richards which was just magical. Its those types of inserts which you afterwards just look at with amazement and wonder. Its not the international things. Those people are often very rehearsed and trained. They've got publicists. You know how it is - sometimes its robotic, they're being put through their paces, its the 45th interview they're doing that day. Its the local things where the spontaneity and magic just happens.

Is there something that All Access wants to try and do more, do differently or change up, or expand into moving ahead into its second year and the future of the show on M-Net?
I think after a year we're consolidating on what we have and what All Access is. We just want to do what we're doing as best as we possibly can. We want All Access to be the best weekly entertainment magazine show on television in South Africa. We already have the All Access VIP club which is doing very well. We have around 2 000 members. And active members! I think we have our recipe, we have our footprint, we're established, we're on a Friday night at 19:30 and we just want to do what we do even better.