FIRST LOOK! See the new Lion-O in the Cartoon Network's updated ThunderCats TV show - complete with the Sword of Omens. 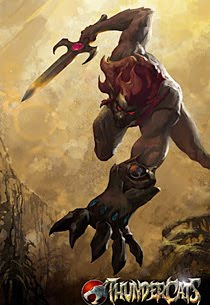 I told you on Thursday RIGHT HERE about the new ThuderCats TV show that the Cartoon Network (DStv 301) is working on, and here is how the new Lion-O looks.

Warner Bros. Animation will be producing the new ThuderCats for the Cartoon Network that will debut the show next year, with South African viewers who might get to see it a few months later.

Warner Bros. Animation is working with Japan's Studio4°C on animating the new ThunderCats series. According to Warner Bros. the new ThunderCats will ''be a sweeping tale combining swords and science and boasting ferocious battles with the highest of stakes. As the forces of good and evil battle each other in the quest for the fabled Stones of Power, Lion-O and his champions learn valuable lessons of loyalty, honor and mortality in every episode."
on 11:35:00 AM