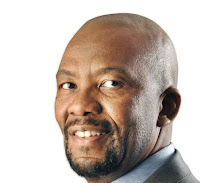 I asked first and I've got the first response from the SABC on the immediate suspension of Gab Mampone, the SABC's former acting group CEO that happened minutes ago and which I was first to report in the previous post in a MAJOR breaking story already sending shockwaves through the local TV industry late on a Friday afternoon.

''The board of the SABC this afternoon suspended the group executive: commercial enterprises, mr. Gab Mampone,'' the SABC tell me, confirming the shocking news.

''The board reached its decision to suspend Mr. Mampone on the basis of information in its possession which appear to point to possible acts of serious misconduct by Mr. Mampone, both in his current position and during his period as Acting Group Chief Executive Officer (May 2008 to December 2009).''

''The board believes that Mr. Mampone’s continued presence at the SABC may jeopardise investigations into the allegations of possible misconduct by him.''

''On Wednesday, Mr. Mampone was invited to make representations on why he should not be suspended. Earlier today, the board received and considered Mr. Mampone’s representations and issued notice of his suspension.''
on 4:22:00 PM