MultiChoice passes milestone of 20 million subscribers across Africa despite Covid-19, says it will focus on expanding its video streaming ecosystem.

by Thinus Ferreira
MultiChoice has surpassed the 20-million for its DStv and GOtv subscribers in South Africa and rest of Africa (ROA) across sub-Saharan Africa for the first time, with the pay-TV operator that now stands at 20.1 million active subscribers, up 6%.
The Covid-19 pandemic was apparently kind for the Randburg-based pay-TV operator with people who stayed inside and decided to watch and catch up on a lot of television.
MultiChoice that released its financial results for the 6 months until the end of September 2020 added 1.2 million 90-day active pay-TV subscribers during the period.
MultiChoice timed the release of its latest financial results with the announcement that the market already knew for months as an open secret: a new DStv Explora Ultra decoder that will go on sale from next week and offer Netflix as the first of several tie-in third-party video streaming options.
The bulk of MultiChoice's pay-TV subscriber base is still in South Africa as its biggest market with 8.7million subscribers or 43%, compared to 11.4 million (57%) in the rest of Africa combined.
MultiChoice reported core headline earnings that were up 41% on the prior period at R2.7 billion. 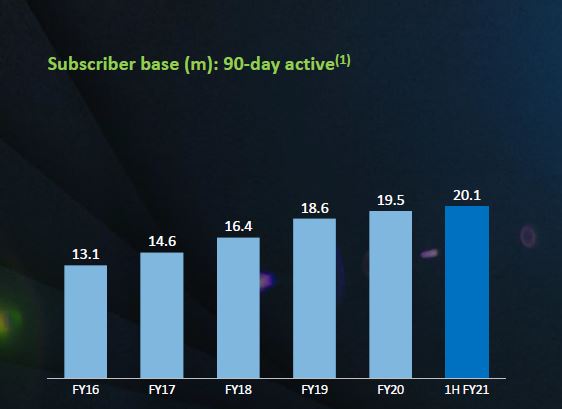 "Despite operating in a challenging environment and being affected by lockdowns, production stoppages and disruptions to live sport, we delivered on all key metrics," says Calvo Mawela, MultiChoice CEO.
"A strong focus on cost-reduction allowed for a further R1 billion in cost savings during this period. We also narrowed the losses in the Rest of Africa by 59% year-on-year or R0.5 billion to R338 million."
"Underpinned by our world-class technology, our emphasis is on offering great content across different platforms and building an ecosystem which keeps customers engaged."
"Our subscriber base of more than 20 million customers provides considerable scale and a platform to continuously add more products and services. We believe that, whether organically or through third-parties, offering our customers an ecosystem of video entertainment options will be fundamental to our long-term success and to making our customers' lives more convenient and fulfilling."
Advertising revenue declined R0.6 billion year-on-year mainly due to a lack of sports advertising and a generally softer advertising market resulting from lower economic activity because of the Covid-19 pandemic, MultiChoice says.
This is echoed in MultiChoice's commercial subscription revenues that were R0.3 billion lower as a result of most hotels, restaurants and other commercial customers remaining closed during lockdown periods.
MultiChoice says it continued its strategic focus of investing in local content and produced 1 870 additional hours of local content despite disruptions caused by the strict early Covid-19 lockdown measures. Its content library is now close to 59 000 hours.
"We will look to expand our entertainment exosystem and revenue prospects through offering new products and services and by pursuing new growth opportunities," says Calvo Mawela.

MultiChoice keeps losing DStv Premium subscribers in droves
MultiChoice continues to show a decline in its average revenue per user (ARPU) since the pay-TV operator keeps losing its most-valuable customers, DStv Premium subscribers who no longer see the top-end package as offering enough value for money given the exorbitant monthly subscription fee.
"The ongoing shift in subscriber mix towards the mass market, combined with the impact on Premium and commercial subscribers as mentioned, resulted in the monthly average revenue per user (ARPU) declining 5% from R292 to R278," says MultiChoice.
MultiChoice's subscriber mix in South Africa: 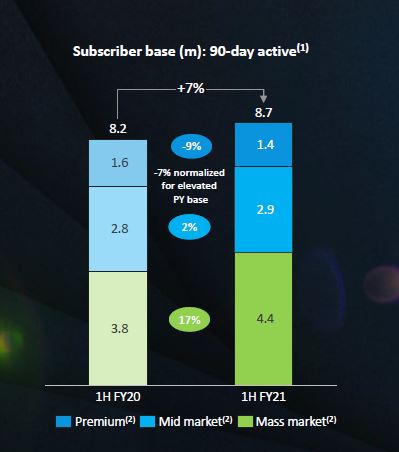 MultiChoice's subscriber mix in the Rest of Africa (ROA): 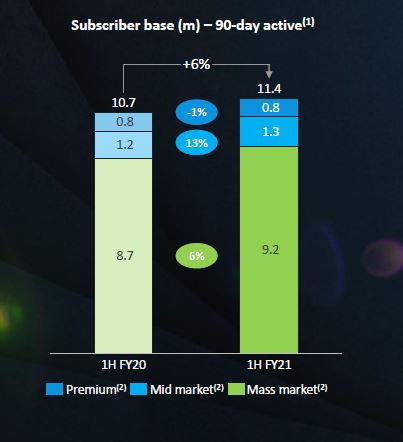