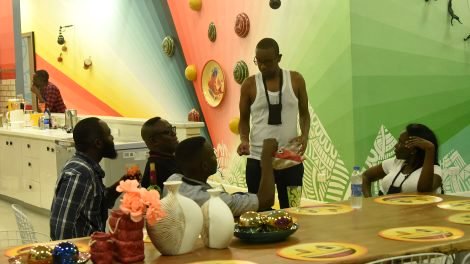 More than two weeks after MultiChoice took a bunch of journalists from various African countries - South Africa excluded and left out - to the new Big Brother Naija house in Lagos, Nigeria, for a weeklong press junket, the first actual first-hand reporting and story of how it was inside, finally appeared.

This is the failing level and standard of entertainment reporting and reporting about television in Africa that companies like MultiChoice Africa either want, or are fine with, since the same scenario regarding press group access keeps repeating itself over and over again, with the same (non-)results.

The disgusting waste of MultiChoice and M-Net money, time, resources and on-set access - including making top-level executives available and doing Q&A sessions - of which there's basically no return on the investment (ROI) in terms of press coverage, is staggering and appalling.

Almost none of the invited journalists filed or reported stories from the press junket beforehand in the days leading up to the broadcast launch of the 4th season of Big Brother Naija, despite getting massive access and living it up in a luxury hotel with internet.

Was it America, or a different set of focused, professional and experienced journalists covering TV and entertainment, there would have been a flurry of reporting right from day 1 of press tour.

It's now actually extremely likely that nothing will appear - no interviews, photo articles, or stories with the MultiChoice or M-Net executives or Big Brother Naija producers, nor anything from any of the other shows and sets from SuperSport to Tinsel the press group got access to during their Lagos media week.

Journalists and influencers from Kenya, Uganda, Ghana , Zambia and Nigeria spent a night in the new Big Brother Naija house.

The questions is: Where is the coverage?

Was the business lounge of the Radisson Blu Anchorage Hotel on Victoria Island in Lagos where media stayed closed or under renovation? Their phones definitely worked, since it wasn't too much actual work to post and do food, fun and fashion selfies.

By some miracle Hilary Kimuyu finally managed to type something up by 14 July 2019. Big Brother Naija started on 30 June.

How are DStv subscribers and people working in, and interested in the broader TV industry and MultiChoice and M-Net's production activities served by non and late coverage?

What value gets unlocked for either MultiChoice that invited media, or the press if none of them actually do what they were invited for, which is to report stories?

Besides hitting the liquor hard, champagning it up and eating a lot, where are the multiple stories about the information and what was said at the media session with John Ugbe, MultiChoice Nigeria CEO; Femi Odugbemi, the West African director of the MultiChoice Talent Factory and students; and Wangi Mba-Uzoukwu, M-Net West Africa channels director?

Where are the on-set images and new stories after the studio and set visits of SuperSport and M-Net's prime time soap Tinsel of which there shouldn't just be one, but several?

This is the first time in 13 years since 2006 that a Big Brother production has been done from inside Nigeria.

There should be more, comprehensive and incisive coverage in the form of multiple news articles spanning a range of subjects, as well as perspective stories about it from the invited media who MultiChoice chose to give access to Big Brother Naija. Where is it?

Instead, media and influencers that MultiChoice Africa took on a press junket, went, saw, took, lavishly lived in leisure ... and did little besides what in essence amounts to a cross-country,  self-indulgent holiday and strutting on the red carpet - something they should never be on in the first place.

That is not what journalism is. That is not what it means to be a journalist. It's sad and disgusting that irresponsible people who don't care for television, nor for covering the TV industry in Africa, are given access to things, people and places they don't and won't cover.

The problem isn't that African Television - so big and bright, vibrant and growing - doesn't have media that can and want to and try to cover and report on it.

It's that when MultiChoice gives access to press for something like Big Brother, those getting it/in, can't bother.


ALSO READ: TV CRITIC's NOTEBOOK. Journalists from across the continent on a Big Brother Naija TV junket with MultiChoice Africa showed off their dazzling feeding frenzy as they 'selfie'd just about everything - except for actually reporting the news and about the business of Big Brother.
on 9:35:00 PM