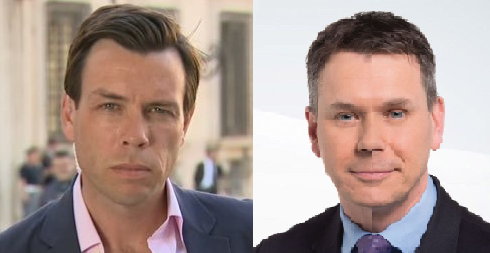 Mark Stone is being moved from Brussels to the Middle East where he will become Sky News' (DStv 402) new Middle East correspondent, while Adam Parsons is being dispatched to Brussels to replace him.

Mark Stone who has been a news reporter at Sky News since 2007 and been at Sky since 2005 as a producer, has been covering the European Union (EU) for the past four years from Brussels.

Adam Parsons who is a business correspondent at Sky News and joined in 2017, is replacing Mark Stone in Brussels as the British TV news channel's new Europe correspondent.

"So, after 4 extraordinary & fascinating years covering Europe, it’s time to move on. I’ll soon be moving patches to the Middle East," wrote Mark Stone on Twitter. "An interesting time to be there but I’ll miss Brussels hugely. The wonderful Adam Parsons is taking over in België with his Europe adventure ahead!"

Adam Parsons tweeted "In August, I’ll be taking over as Europe Correspondent for Sky News, based in Brussels but covering the whole continent. An exciting, fascinating challenge, reporting on a time of change across Europe. And yes – Brexit too."
on 8:51:00 PM