Erin Bates out at eNCA as the latest reporter to resign from the TV news channel that continues to lose high-calibre journalism talent. 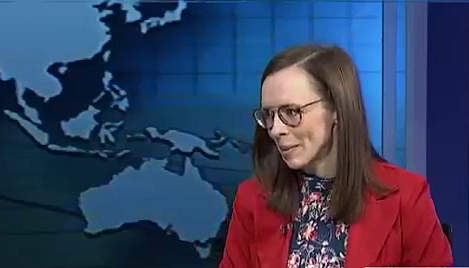 Erin Bates is the next TV reporter to exit eNCA (DStv 403) shortly after Leigh-Anne Jansen resigned last week and the axing of Tonight with Jane Dutton.

eNCA on Thursday in response to a media enquiry confirmed to TVwithThinus that Bates is gone after a year and 9 months and that Jansen decided to leave.

On Thursday morning on social media Erin Bates wrote that "Yesterday was my last day of work at eNCA. It has been my pleasure and privilege to meet diverse people, listen to their stories and file reports. I've worked with some wonderful broadcast professionals and journalists. For that I am so grateful. Today a new chapter begins".

The exit of Erin Bates and Leigh-Anne Jansen are the latest in a string of high-level departures that has been ongoing for over a year as eNCA continues to lose veteran talent and struggles with schedule and programming line-up changes.

It's happening while eNCA has to face new competition in terms of TV channels like Newzroom Afrika, and Open News which is produced by its own company as a free-to-air alternative carried on its Openview platform.

After Jane Dutton was lured back to South Africa from Al Jazeera to anchor eNCA during prime time, in mid-June eNCA abruptly cancelled Tonight with Jane Dutton without warning after just a year and declined to say why.

Meanwhile yet another eNCA schedule overhaul is coming with the channel that has cancelled the long-running Maggs on Media as well as other current affairs shows, and with yet another retool of the schedule coming just a year after the previous one was implemented in July 2018.
on 1:47:00 PM