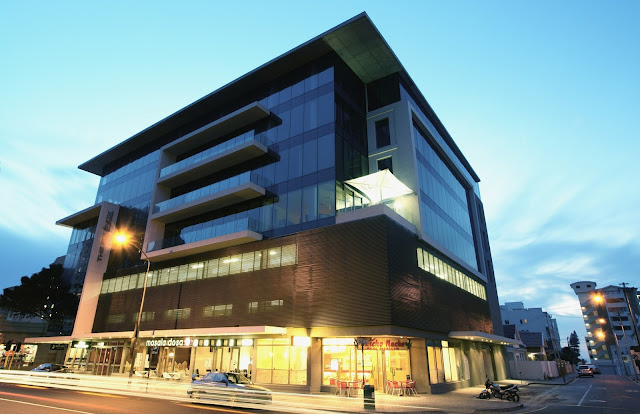 SABC3's morning show Expresso and Afternoon Express will leave its studio and office space inside The Equinox Building in Sea Point, Cape Town after 9 years and move to a new studio facility in Tokai from where the shows will broadcast from 24 June.

As TVwithThinus reported yesterday, both shows and the production company are leaving their longtime studio space berth atop the Sea Point high-rise after nearly a decade at the end of this week.

Cardova Productions, sister company of Tswelopele Productions, moved into the 7th floor penthouse space of The Equinox in October 2010 at 154 Main Road in Sea Point on the corner of Main Road and Milton Road where its been doing the weekday Expresso morning show and Afternoon Express from since.


The Hello Doctor/Dr Mol Show/Doctor's Orders show also produced by Cardova for SABC3 was also filmed inside The Equinox until it was axed, as well as programming for shows like Win a Home.

Using the top floor of The Equinox including exterior backdrops for its live broadcast the past 9 years has lend Expresso watchers a fascinating and constantly changing view on the ever-changing seasons and the vagaries of Cape Town's temperamental weather.

SABC3 in response to a media enquiry confirmed the move happening on Friday and says the shows will go live from the new studio on 24 June.

Cardova Productions and SABC3 were asked why the production company and the shows are moving out of the existing building but didn't respond with an answer.

According to insiders the new studio will be based in the picturesque Westlake in Tokai, close to the Tswelopele Productions head office in the same suburb.

"This is so that the shows can be loser to that head office," said a source. "Tswelopele and Cardova are sister companies, so it makes sense to house all production for Top Billing, Afternoon Express and Expresso within earshot of each other".
on 11:24:00 AM