eNCA doing a 'Floods Special' with Dasen Thathiah on Saturday as part of a special report during Week in One looking back at the impact of the severe flooding in South Africa's KwaZulu-Natal. 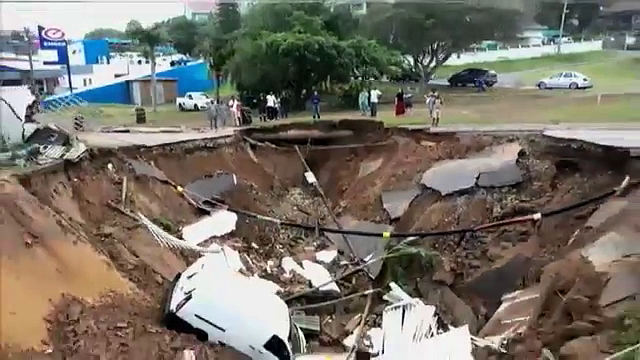 eNCA (DStv 403) is doing a 'Floods Special' with reporter Dasen Thathiah on Saturday as part of a special report during the TV news channel's Week in One programme that will be looking back at the impact of the severe flood damage in South Africa's KwaZulu-Natal and Eastern Cape provinces this past week.

e.tv and eNCA publicists didn't issue any media advisory about the special programming to the press with no notification or details that were released.

The special report will be repeated on Sunday at some time with eNCA that failed to provide to provide any programming details.

Meanwhile Cyclone Kenneth is barrelling closer to Southern Africa and has made landfall in northern Mozambique, destroying houses, ripping up trees and knocking out electricity.

After its massive failure to properly prepare and dispatch TV reporters and camera crews ahead of Idai's landfall in Mozambique during March and subsequently lacking any real-time on-the-ground coverage of the impact and devastation in Mozambique similar to what was shown on other international TV news channels, it's not yet clear whether the SABC's SABC News (DStv 404) and eNCA have this time improved its logistics and newsroom management to dispatch crews quicker and better place journalists on the ground.

With Idai, eNCA and SABC News respectively sent one reporter at a time to Mozambique and Zimbabwe and had their journalists piggy-back on aid-givers, rescue workers and South African army efforts as embedded reporters.
on 8:53:00 AM