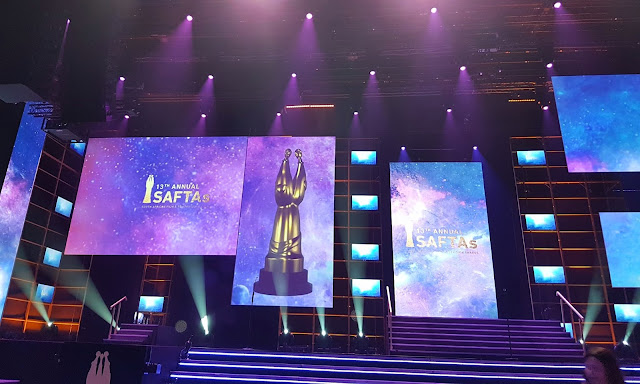 Yet again the mediocre and mistake-riddled broadcast production of the 13th South African Film and Television Awards on Saturday night on SABC2 was an embarrassment - a shameful slap in the face of the very industry it's supposed to represent and showcase.

The flat and terrible 2019 Saftas looked like a shoddy, unrehearsed school drama club presentation, prepped with little time, with people who came dressed up for it.

Besides continuous sound problems, sound level and sound mistakes like mics muted when they shouldn't be and live when they shouldn't ("Who are we going to bring in?"), bad editing, bad lighting, and a plain, boring and uninspiring steps-stage set design by Michael Gill Designs, the 13th Saftas was also plagued by some badly done and energy-less musical acts.

The 13th Saftas yet again botched the In Memoriam segment and left out names.

Of pacing there was little sign with the 3-hour live broadcast Saftas show that ran 20 minutes over its scheduled and allotted time, with an embarrassing no envelope fiasco, a wrong envelope mess, with dull co-hosts looking more interest in soliciting audience purrs for their outfit changes.

The noticeable absence of many shows missing from the 13th Saftas due to an active boycott wasn't mentioned or explained to viewers, allowing MultiChoice's pay-TV channels like M-Net, 1Magic, Mzansi Magic and kykNET on DStv, and the video streaming service Showmax, to rise in winning awards.

Produced by Clive Morris Productions there was shamefully and noticeably no tribute video package from the NFVF at the 13th Saftas for veteran showrunner, director and writer Thandi Brewer who got a special industry achievement award. Why not?

The 13th Saftas had at least one category presenter admitting that she didn't show up for rehearsals; a few great speeches interrupted by play-off music when they needed just a few discretionary seconds more from producers; categories that belong in the main awards that got inexplicably dumped to the "technical" awards; as well as bumpy and shaky camerawork unbefitting an awards show.

The unprofessional mix-up with envelopes during the feature film categories in the 13th Saftas and the way that viewers saw that nobody apparently knew what to do, was cringe-worthy to watch.

An unending stream of people in the Sun City audience were constantly seen on screen getting up during the broadcast and not waiting for ad breaks, walking around, leaving seats and returning to seats.

The NFVF and producers still don't employ seat fillers for the few front rows, once again leaving ugly empty seats visible at the 13th Saftas that was done for a third time from Sun City.

What sounded like weird and unsuitable news jingle and adventure film can music were used as filler during people's walk to and from the stage.

Editing, directing and vision mix wise, selecting what came in from the cameramen, fatigued Saftas viewers got predominantly three angles over and over again, each basically just constantly zooming in and out: front middle, jimmy jib stage left, and a steadicam cameraman scurrying around in front of the stage steps doing "shoot from below looking up at Everest" shots. 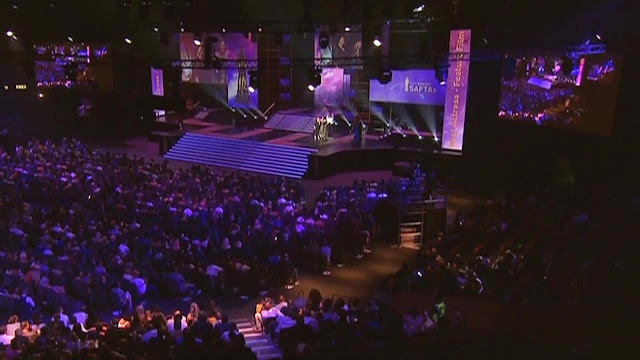 Some category winners saw hangers-on from their various productions also storm to the stage with them, like uncontrollable moths to a fame flame.

The minister of arts and culture, Nathi Mthethwa, looked like he was reading his long-winded speech on the autocue screen for the first time, often-times haltingly and jarringly stumbling over his words.

The shoddy production values marred an awards show ceremony that is supposed to show how good South Africa's film and TV production is but once again made it look amateurish.

A bland and boring red carpet show - looking like a shopping mall brand promotion activation and done from a shaky side-platform - lasted for just 30 minutes from 19:00 on SABC2 after which the channel hilariously broke away to an episode of Abo Mzala for a half hour before starting the awards ceremony broadcast at 20:00.