The sun is setting on e.tv's morning show, Sunrise, in e.tv's latest downsizing; tears as fear and anxiety grip staffers who got told that they're facing retrenchment. 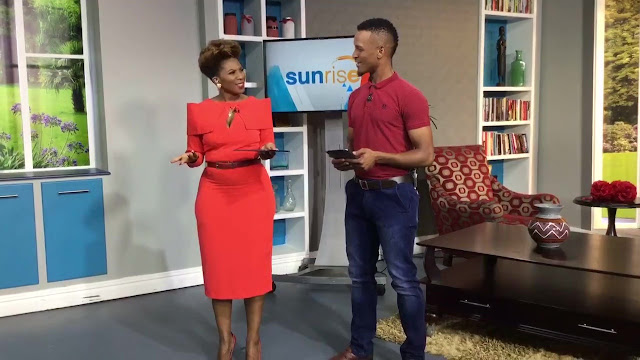 The sun is setting on e.tv's Sunrise breakfast show with e.tv that is planning on canning the existing version of the long running show and all its staffers at the end of March, with shocked workers who have been served retrenchment notices and are likely getting fired.

Sunrise has been on-air since 1 April 2008 when it replaced Morning Edition, and which in turn replaced e.tv's first try at breakfast television, The Toasty Show.

Now Sunrise - that over the past few years with limited resources struggled to complete with SABC2's Morning Live and SABC3's Expresso - is the next e.tv programming strand that has been earmarked for cost-cutting and shuttering in e.tv's ongoing trend of "downsizing" of news and current affairs programming.

e.tv is apparently now looking to outsource its morning show to an outside production company.

e.tv and eNCA cut and shuttered its Cape Town newsroom staff and studio in August 2016, following after large eNews and eNCA staff and programming cuts that took place in April 2015.

Adding irony is that e.tv is culling Sunrise a day before its 10th birthday with the show that has also cycled through several executive producers the past few years - with at least one in recent years who was asked to leave immediately.

Also ironic in e.tv wanting to outsource its morning show is that it wants to do the opposite of what the SABC tried and already discovered years ago wasn't working. The SABC outsourced it's morning show, AM2Day that was produced by Urban Brew Studios, before cancelling it and starting the existing Morning Live as an in-house production.

At eMedia Investments, e.tv and eNCA's head of current affairs, Debbie Meyers, has also recently resigned, although her resignation is not related to the downsizing of Sunrise and the shedding of staffers. e.tv's long running Club 808 has also been canned and will broadcast its final episode on 30 March with e.tv that says it won't be replacing it with a new music magazine show.

eMedia Investment staffers, beyond people directly working on Sunrise, have been left shaken and shocked over the Sunrise shutdown and outsourcing plan, not just wondering who is next, but why e.tv that's in the business of television and that has the capacity, now wants to pay external people for what can apparently be done by permanent staff in-house at the Hyde Park headquarters.

Staffers from divisions like eNCA, eNews and even the Afrikaans eNuus produced and done for kykNET (DStv 144), voiced concern the past two weeks over colleagues at Sunrise losing their jobs and it coming at the beginning of the year.

According to sources, staffers in the IT department are already serving their notice period. "IT personnel have an institutional memory on how to run the on-air system. How will outsiders do it? It opens the door for so many on-air problems," said a source.

Meanwhile full-time staffers have been served with pre-retrenchment notices, according to sources, with e.tv telling workers it's starting the process to legally retrench them. It's not clear what will be happening to Sunrise's on-air talent like Penny Lebyane, Mark Haskins and for instance news anchor Marc Chase who likely have different talent and work contracts with e.tv. Faith Mangope already left in September 2017 after four years with the show.

Meanwhile eMedia Investment staffers have been buzzing internally that even security and cleaning staff have been served notices, although this couldn't be independently confirmed.

"The whole of Sunrise got retrenchment letters, as did cleaners and security," said another concerned e.tv insider source not working for Sunrise specifically but familiar with what's happening there. "Functions will be outsourced. They've also retrenched IT. There are big job cuts going on," said this source, calling what's happening at e.tv and Sunrise with producers and staffers "devastating".

Sunrise is currently broadcast between 05:30 and 08:30 on e.tv as a three hour weekday strip on the schedule.

In a media enquiry e.tv was asked about the whole of Sunrise getting fired and if e.tv can say why this is being done and how many people are losing their jobs.

e.tv was asked who and how Sunrise - whether under this name or as a new show, if there is still going to be a morning-type show going forward - will be produced in future and why e.tv took the decision to no longer do Sunrise itself.

e.tv was also asked if it can explain the move to outsourcing and not doing news and actuality programming itself or in-house when it has permanent crew and news people, and what the rationale is for this move.

"At times in the life cycle of a business, it is necessary to look at a company’s needs and requirements. eMedia Investments is currently considering its structure and making necessary changes to ensure it continues to be a profitable and strong business."

"This is an internal matter between the company and employees and we will not discuss or debate it in the media," said Mark Rosin. "eMedia Investments is committed to ensuring that employees are treated fairly and respectfully during this process, which is of course difficult for everyone."
on 1:08:00 PM