New M-Net wedding reality special of the Nigerian stars, Banky W and Adesua Etomi, will be broadcast on Africa Magic channels on DStv on 6 January. 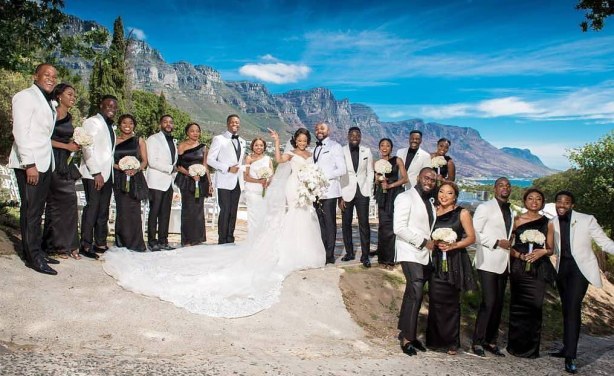 M-Net is following up Minnie Dlamini's TV nuptials with another TV wedding spectacular: the lavish Cape Town wedding in November of the Nigerian rapper, Oluwabankole Wellington - known as Banky W - and the Nigerian actress Adesua Etomi will be broadcast this Saturday across the continent on MultiChoice's DStv's satellite pay-TV platform.

After Nigerian artists have been flocking to South Africa and especially Cape Town the past two years as the place on the continent to film their music videos in sun-drenched mansions along the Cape Peninsula, the Nigerian government is reportedly planning to ban Nigerian singers from filming further music videos here.

While Nigerians are dissuaded by their government from making music videos and films in Cape Town, nobody can tell a bride where she can and can't have and film her wedding, and on Saturday viewers can watch the over-the-top Cape Town wedding reality show, The Wellingtons on M-Net's Africa Magic channels on DStv.

The celebrity-wedding documentary The Wellingtons will be broadcast on Saturday, 6 January on Africa Magic Showcase (DStv 151) and Africa Magic Urban (DStv 153) at 21:30 showcasing the couple's Cape Town "destination wedding" along with the crush of friends and family wedding guests who jetted to the southern tip of Africa for the big occasion.

Banky Wellington and Adesua Etomi met on the set of the Nollywood film, The Wedding Party, with their black-and-white wedding in November that instantly became 2017's most talked about Nigerian celebrity wedding even though it took place in Cape Town.

M-Net has so far had great and continued ratings success in the wedding TV genre and has now rolled out specific wedding themed programming for its entire set of M-Net packaged channels on DStv.

On M-Net (DStv 101) The Wedding Bashers has kept viewers glued during 2017 with a collection of diverse South African weddings, with the same happening with the hugely popular Our Perfect Wedding on Mzansi Magic (DStv 161); while the Afrikaans M-Net channel kykNET (DStv 144) has Ons Sprokiesbruilof.