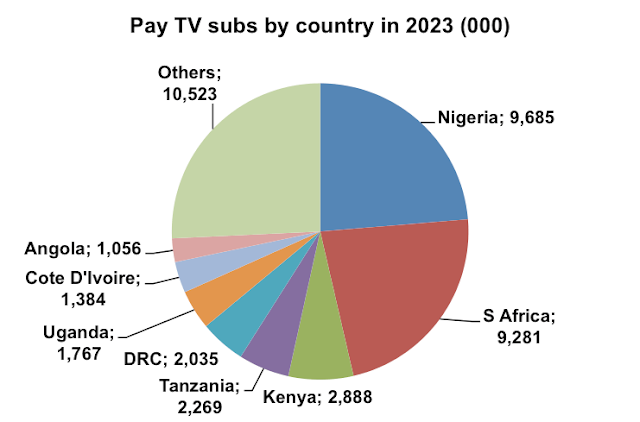 Pay-TV subscriptions in sub-Saharan Africa is set to soar and will continue its massive growth in the next 5 years, increasing by 74% between 2017 and 2025, and adding 17.4 million pay-TV subscribers to reach 40.89 million pay-TV households according to the projections in a new research report compiled by Digital TV research.

Together with pay-TV growth, will come an increase in competition, with competing pay-TV companies that are already lowering subscription fees and subsidising decoder costs.

Over the same period, according to projections, pay-TV revenue in sub-Saharan Africa will increase by 14% to $6.64 billion.

While South Africa continues to have the most pay-TV subscribers on the continent, Nigeria is set to overtake South Africa by 2021.

By 2023 South Africa, Nigeria, Kenya, Tanzania and the Democratic Republic of Congo (DRC) will be the top 5 pay-TV countries in Africa according to pay-TV subscriber numbers; followed by Uganda, the Ivory Coast and Angola.

According to Digital TV Research, by 2023 this will have grown to 40.89 million for satellite TV and 8 million DTT pay-TV subscribers.

MultiChoice had 12.48 million subscribers across its DStv satellite pay-TV platform service and its GOtv DTT service by the end of 2017, and that is set to increase to 16.66 million by 2023 according to growth estimates.

Naspers' MultiChoice remains by far the largest pay-TV operator on the African continent.

Vivendi had 2.96 million subscribers for its Canal Plus satellite pay-TV platform and Easy TV at the end of 2017 and will likely increase this to 4.87 million by 2023.

StarTimes,operating as StarSat in South Africa see its subscriber base in Africa and South Africa increase from 6.23 million subscribers at the end of 2017 to 13.42 million by 2023.

“Pay-TV competition in sub-Saharan Africa is becoming more and more intense, especially given the launch of Kwesé in 14 countries during 2017," says analyst Simon Murray who compiled the research.
on 11:45:00 AM