The SABC says it now wants satellite TV operators to pay for the SABC channels they're forced to carry under a regulatory 'must carry' rule.

South Africa's public broadcaster, the SABC, is asking the country's broadcasting regulator to review the so-called "must carry" rule under which satellite pay-TV operators are currently forced to carry the SABC's TV channels, but are in return not required to pay for it.

Under the "must carry" regulation from the Independent Communications Authority of South Africa (Icasa) introduced almost a decade ago, satellite TV operators like MultiChoice's DStv, China's StarTimes Media SA and On Digital Media's StarSat, WoWtv and Siyaya TV must all carry the SABC's SABC1, SABC2 and SABC3 channels.

Since these satellite operators are compelled through the regulation to carry these SABC channels, they are not required to pay for it.

Now the cash-strapped SABC, that recorded a R977 million loss at end-September for its latest reported financial year, wants satellite TV operators to pay money in exchange for the retransmission and relaying of its free-to-air analogue channels on the pay-TV operator's digital channel bouquets.

The SABC chairperson Bongumusa Makhathini has written to Icasa, asking for an urgent public review of the "must carry" regulation that was introduced in 2008.

"Contrary to the enabling legislation, which provides for 'commercial negotiations' between the parties, the regulations state the SABC 'must offer its television programmes at no cost' to subscription broadcasters," the SABC says.

The SABC says that Icasa's "must carry regulations" have "had a serious impact on the SABC from a potential revenue point of view".

The SABC says the SABC board is currently conducting an urgent review of all contracts and regulations that negatively impact on the sustainability of the public broadcaster.

According to Bongumusa Makhathini the "must carry regulations effectively 'zero rate' the three SABC channels and have created a "precedent-setting, non-commercial negotiating environment".

Also at play and coming to bear on the issue is that the SABC has failed to make significant progress in South Africa's lagging switch from analogue to digital broadcasting, a process known as digital migration, to digital terrestrial television (DTT).

The SABC's channels are not yet universally available as digital free-to-air channels in South Africa.

Under DTT all of the SABC's TV channels - SABC1, SABC2, SABC3 - and including SABC News and SABC Encore supplied to MultiChoice's DStv exclusively as part of a controversial commercial deal, would become available for free, to all viewers.

The SABC says SABC1, SABC2 and SABC3 are among the most watched channels on DStv.

"In 2008 the regulations seemed to be drafted on the basis that the 'must carry obligation' was an onerous once for subscription broadcasters and that these broadcasters would be 'doing the public broadcaster a favour' by carrying its channels as part of a subscription television bouquet."

"The SABC will demonstrate in the public process that, on the contrary, the SABC must carry channels have commercially benefited MultiChoice Africa at the expense of the public broadcaster."

"It is the SABC's view that the 2008 regulations have unfortunately failed to protect the viability of the public broadcaster and it is on this basis that we submit that the regulator should urgently commence a separate, public regulatory process to review the must carry regulations," says Bongumusa Makhathini.

The SABC says it is proposing "relatively simple amendments to the regulations that only seek to bring the must carry regulations in line with the enabling legislation and create the correct regulatory framework for commercial negotiations between the public broadcaster and subscription broadcasters".

Bongumusa Makhathini told Icasa that "the viability of the public broadcaster is at stake here".

TVwithThinus asked both MultiChoice and StarSat for comment on Thursday morning as well as the regulator, Icasa.

"The regulations had great benefit to the public broadcaster and the public at large as SABC channels were made available nationwide on all pay-TV platforms, including DStv, to fulfill the SABC's universal access mandate."

"The draft white paper on audio-visual and content services is currently before cabinet. It addresses, amongst other issues, the must carry regulations and the funding of the public broadcaster."

"We believe this matter should be dealt with in this policy process. The white paper process will most likely consider the changing nature of television and whether new over-the-top (OTT) operators should also be subjected to regulations, including the must carry regulations".

MultiChoice says it believes that any stakeholder, including the SABC "that does not agree with Icasa or think the regulator acted outside of its powers, can have the process reviewed through the courts."

"The SABC chose not to do so when the regulations were made 9 years ago."

In its letter to Icasa, MultiChoice says "MultiChoice is sympathetic to the financial difficulties currently faced by the SABC".

"However we believe it is opportunistic for the SABC to use these difficulties to motivate now for the urgent amendment of regulations which have after all, been in force for some time."

"As the SABC itself acknowledges, the main causes of its current financial crisis lies elsewhere. It is also disingenuous for the SABC to seek an urgent amendment of the regulations on the basis that they are ultra vires, 9 years after their coming into operation, in circumstances where the SABC failed to review them in the courts of law."

MultiChoice says "further we take exception to the singling out of MultiChoice ... as having commercially benefited from the regulations at the expense of the public broadcaster. The must carry regulations govern all pay-TV broadcasters that carry 30 or more channels.

"As the regulator and various policy documents have stated, the must carry obligation is critical to universal access and the objective of providing public broadcasting services to all citizens, rather than for the purpose of funding the public broadcaster."

MultiChoice told Icasa that "In South Africa, there has undoubtedly been great benefit both to the public at large and to the public broadcaster, from having the SABC channels available countrywide on pay-TV platforms, including on DStv".

"Carriage of the public broadcasting services in terms of the regulations gives the SABC 100% geographical cover and service availability throughout South Africa. Not only do consumers benefit from this, but the SABC benefits from extended coverage, larger television audiences and increased advertising revenue at no extra cost."


Icasa: SABC won't be getting any 'urgent public review' soon
The broadcasting regulator Icasa told TVwithThinus that the regulator's must carry rules won't be reviewed soon and that the SABC's urgent request won't be considered any time soon.

Icasa said it "noted the contents of the letter received from the SABC on 21 November 2017 in respect of the impact of the must carry regulations" and that any process to change regulations "must involve engagement of all stakeholders through public consultation to afford all affected and impacted parties an opportunity to be heard".

Icasa says "the same process was followed during the development and implementation of the current must carry regulations, and the SABC participated fully in that process".

According to Icasa the SABC won't get an urgent public review of the must carry regulations anytime soon.

"The review of the must carry regulations is not in the plan for the current financial year," says Icasa.

"Therefore the SABC's request for this review can only be considered in line with the regulator's future planned programmes of performance and delivery of its mandate."


Here's the SABC's letter to the regulator: 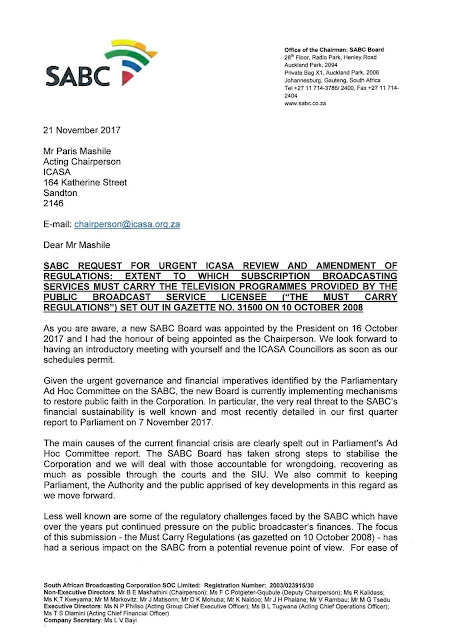 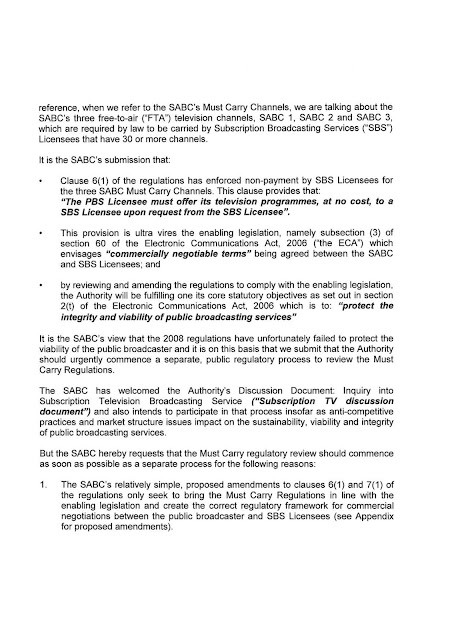 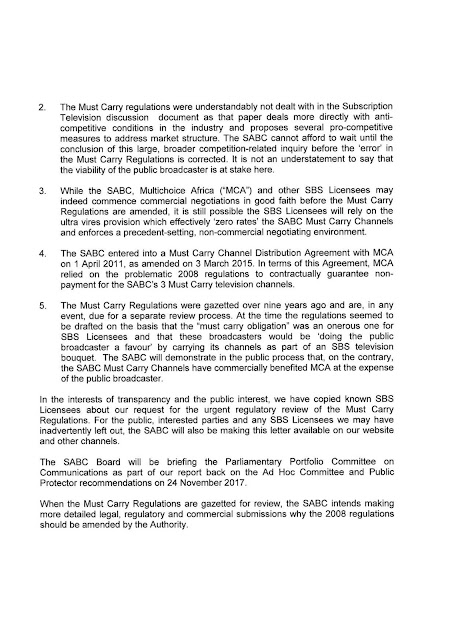 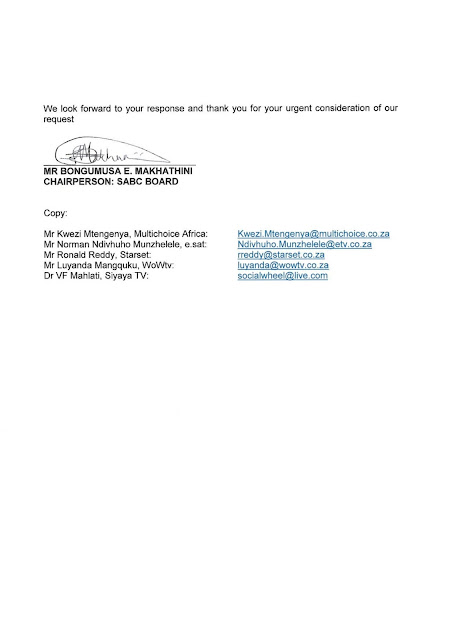 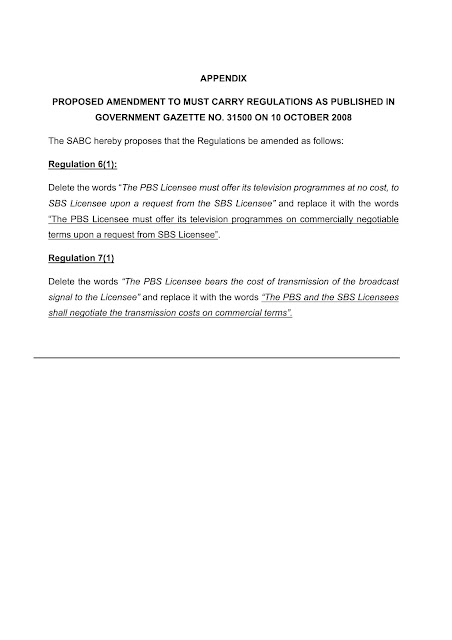 Here's MultiChoice's letter to the broadcasting regulator, in response to the SABC's letter: 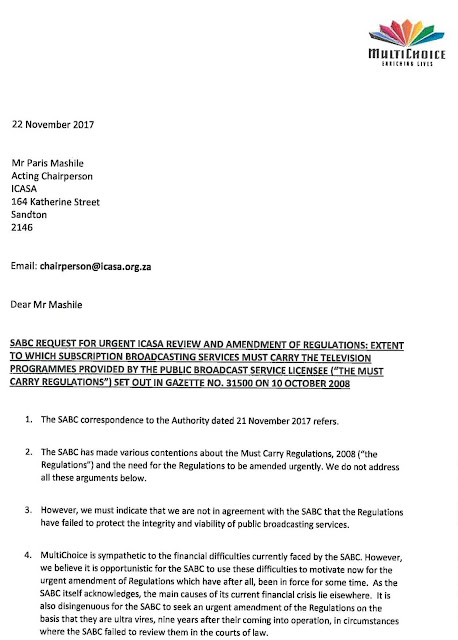 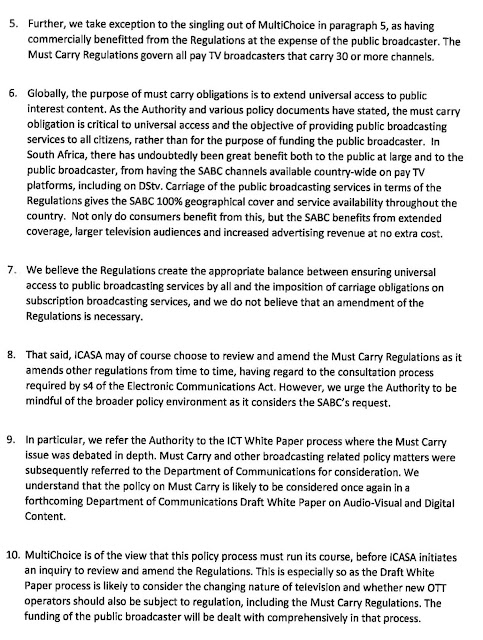 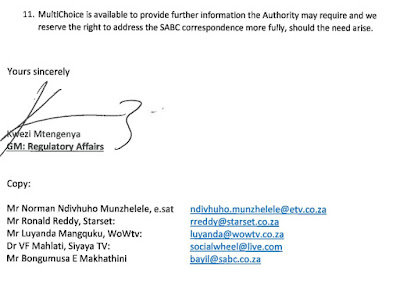