More #GuptaLeaks revelations are engulfing MultiChoice in a growing scandal over its controversial ANN7 contract with the Guptas, with MultiChoice saying there's nothing wrong with paying ANN7 an eye-watering R141 380 000 per year for the low-rated, highly criticised and mistake-filled channel.

MultiChoice brand damage continues to increase as MultiChoice is being battered by ongoing new shocking revelations regarding its ANN7 (DStv 405) contract with the controversial Gupta family who are embroiled in State Capture claims.

MultiChoice itself is now being accused of corruption and collusion with the Guptas and tainted politicians like Faith Muthambi, by a growing chorus of the public and political parties.

The Democratic Alliance (DA) political party has given MultiChoice an ultimatum, saying DStv has 48 hours to make its contracts and prior negotiations with the Guptas over ANN7 public, or the DA will request the broadcasting regulator, Icasa, to compel MultiChoice to do so.

The Democratic Alliance and Economic Freedom Fighters (EFF) political parties are also calling for a public parliamentary inquiry into MultiChoice, its dealings and contracts with the Guptas over ANN7, and the former minister of communications, Faith Muthambi.

In shocking new #GuptaLeaks, News24 on Friday dropped a bombshell email trove, showing how MultiChoice made a dubious R25 million payment to the Guptas for its low-rated, biased and mistake-filled trash channel, in addition to upping the money MultiChoice pays to ANN7 from R50 million to a whopping R141 million per year.

The emails revealed that MultiChoice is paying ANN7 R141.38 million as part of its contract for the channel, a channel that stands accused of fostering racial discord, biased and unbalanced coverage and targeting politicians who are against president Jacob Zuma.

According to a 4th channel amendment agreement signed by Glen Marques in September 2015, MultiChoice upped its payment from R50 million to R100 million to a staggering R141 380 000 per year although ANN7 is the least watched of the three local TV news channels with SABC News and eNCA as rivals. 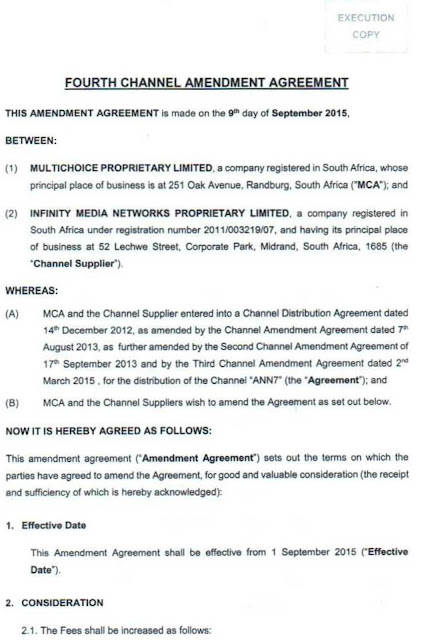 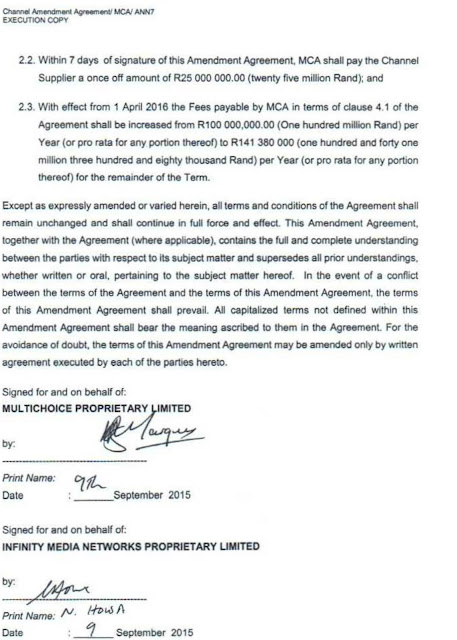 Ironically MultiChoice is splurging more money on ANN7 - although it only has a fraction of the viewership in the form of a paltry 8.9% news audience share - that what DStv is paying eMedia Investment's eNCA (DStv 403) that is now only getting R140.8 million from MultiChoice although it is the most watched TV news channel on all of DStv's platform with over 50% news audience share.

MultiChoice told News24 that when it decided to add ANN7 from the Gupas' Infinity Media Network, "the only other channel on the DStv platform at that stage was eNCA".

MultiChoice then says "The eNCA contract was up for renewal, and there were signs that it was not going to be renewed".

Also raising eyebrows in the latest #GuptaLeaks regarding ANN7 is how a MultiChoice executive, Clarissa Mack - now gone from DStv - directly sent policy documents - a "Effect of presidential proclamation"document in July 2014 to the then minister of communications Faith Muthambi about government policy.

Faith Muthambi, shockingly, then sent this MultiChoice document to Ashu Chawla of the Guptas, detailing how to give Faith Muthambi control over broadcasting in South Africa.

Clarissa Mack also created another document about signal distributors Sentech and Infraco that she sent from MultiChoice to Faith Muthambi - a document Faith Muthambi shockingly also sent to Ashu Chawla.

"See attached Proclamation that President must sign," Faith Muthambi wrote to Ashu Chawla, who then forwarded it to Tony Gupta.

In another eye-popping revelation, the then MultiChoice CEO Imtiaz Patel suddenly got listed as a director, along with Tony Gupta, and Jacob Zuma's son, Duduzane, in the same company, IslandsiteInvestments 255.

MultiChoice says it was only for a day, happened without Imtiaz Patel's knowledge and that he resigned and removed his name from the company register on the very same day he was appointed.


MultiChoice: Nothing unusual about paying ANN7 R141 380 000 per year
After the News24 story, TVwithThinus asked MultiChoice why Clarissa Mack while she worked for MultiChoice sent documents directly to Faith Muthambi and why MultiChoice increased the ANN7 payment from R50 million, then R100 million, to R141.38 million if ANN7 under-performed and received widespread criticism for its content.

MultiChoice was asked why the then CEO Imtiaz Patel was listed as director of a company with Tony Gupta and Jacob Zuma's son Duduzane Zuma and why MultiChoice made a once-off payment of R25 million to the Guptas for ANN7.

MultiChoice says "the fee structure for the ANN7 contract is in line with the costs of developing and running such a channel, and ANN7 is definitely not the highest-paid local news channel on the DStv platform".

"The R25 million fee is also not unusual. In this case, it was a pro rata payment in terms of an amendment agreement."

The fee structure for the ANN7 contract is in line with the costs of developing and running such a channel, and ANN7 is definitely not the highest-paid local news channel on the DStv platform."

"Regarding our submission to Faith Muthabi: The Presidential Proclamation creating two new ministries didn't make sense to a number of stakeholders in the broadcasting sector," says MultiChoice.

"Several of these stakeholders made submissions to the minister suggesting it be corrected. MultiChoice was one of these, and many of its proposals were rejected."

MultiChoice says "it is standard practice for companies to interact with the industry regulator and government on policy matters, including making proposals on regulatory or legislative issues. There is nothing wrong with that."

MultiChoice didn't specify what it makes of Faith Muthambi sending MultiChoice's policy documents to the Guptas.

"There is absolutely no relationship between our submission on the proclamation, the channel supply agreement for ANN7, and any fees or increase in feed paid for that channel," says MultiChoice.

MultiChoice says "Imtiaz Patel was NOT involved in any business partnership with the Guptas and Duduzane Zuma in IslandsiteInvestments 255. The CIPC records reflect that he was appointed and resigned as a director on the very same day in 2009 - 8 years ago."

Earlier this week MultiChoice said it is not negotiating with ANN7 for a contract extension when the existing contract ends in June 2018.

Political parties demand parliamentary inquiry into MultiChoice's "corrupt" and "unethical" ANN7 deal with Guptas
Both the Economic Freedom Fighters (EFF) and Democratic Alliance (DA) political parties on Friday called for a parliamentary inquiry into MultiChoice's allegedly "corrupt" dealings with the Guptas and politicians over the ANN7 channel.

The DA's member of parliament Phumzile Van Damme told TVwithThinus that "we believe that this issue be investigated by parliament, as part of the broader State Capture inquiries undertaken by the different committees in Parliament."

"We are in particular seriously concerned about MultiChoice, and what appears to be unethical conduct in this regard relating to the Gupta family. We intend on getting to the bottom of this."

The EFF's member of parliament Mbuyiseni Ndlozi in a statement says "The EFF condemns the corrupt relations of MultiChoice and Faith Muthambi which suppressed competition within the pay-TV industry with disgust".

"The recent revelations in the #GuptaLeaks show how Faith Muthambi as minister of communications worked with the Guptas to solicit bribes in exchange for protection of MultiChoice from the competition".

"Koos Bekker's company, MultiChoice, paid millions to the Guptas, through ANN7, in exchange for Faith Muthambi to adopt the policy of unencryption in the set-top boxes for digital terrestrial television (DTT) migration."

"The Guptas, through their influence on Jacob Zuma and Faith Muthambi, managed to guarantee their stay on the DStv platform whilst being remunerated unreasonable amounts of money despite their low audience numbers," says Mbuyiseni Ndlozi.

"It is clear that MultiChoice was paying them for securing a DTT policy in relation to set-top boxes that would maintain them as the sole players in the pay-TV space."

'The EFF calls on parliament to hold an inquiry into the Gupta influence over Faith Muthambi. In this inquiry, companies like MultiChoice must be held accountable publicly for their criminal activities in the sector, suppressing competition in favour of their domination."

"The EFF will also be reporting MultiChoice to the Competition Commission to investigate how they influenced the policy on set-top boxes in favour of their market domination."
on 12:41:00 PM