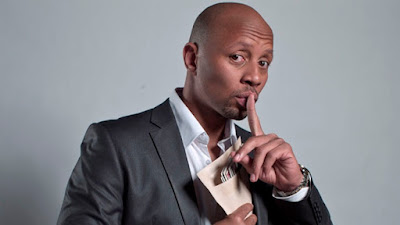 Phat Joe (real name Majota Khambule) is gone from the SABC show Real Goboza (RGB) after the shock jock presenter and the production company both decided they've had enough, with the beleaguered public broadcaster that has also fired several more SABC Sport presenters as its running out of cash.

After initially saying he would be back, Phat Joe, who has been absent from the show for a month, now won't return to SABC1's celebrity magazine lifestyle show RGB produced by Urban Brew Studios, which he presented for 7 years.

Unplanned and leaving RGB with no permanent replacement, Phat Joe becomes the latest marquee name to jettison the SABC that continues to lose iconic on-air talent across its TV channels and radio stations and who have been moving to other broadcasting opportunities - especially pay-TV - over the past year.

Earlier this month Phat Joe left his drive time show on East Coast Radio after just a year and racking up 77 complaints over inappropriate comments with the Broadcasting Complaints Commission of South Africa (BCCSA) with "mutual consent" - entertainment industry lingo for both the star and the platform who don't want each other anymore and agree to part ways.

Now Phat Joe won't be seen on RGB anymore after he became the presenter of Take Me Out Mzansi dating game show on VUZU AMP (DStv 103) - the revived Take Me Out South Africa format show from Rapid Blue that used to be on SABC1 and that was taken over by M-Net for one of its channels.

To further rub wounds into the SABC that doesn't like its talent to appear on other DStv TV channels, Phat Joe also just made an appearance as a guest judge on the latest 13th season of Idols on Mzansi Magic (DStv 161) this past Sunday, another M-Net packaged channel for DStv.

Similar to East Coast Radio, the parting between Phat Joe and RGB was "a mutual decision" - both have had enough, with Sinazo Yolwa who will hold the fort and comedian Donovan Goliath roped in as a guest presenter for the time being.

"Phat Joe has been a valuable member of the RGB family and an excellent driver on our journey of entertaining South Africans," says Sydney Mekgwe, RGB producer in a statement. "His professionalism, insight and engaging character kept our viewers glued to their screens. We wish him all the best."

SABC1 channel head Clara Nzima in statement says "SABC 1 prides itself as the aggregator of some of the most popular entertainment shows in the country and it is talent like Phat Joe that makes our content accessible to the viewers. Sadly our journey with him has come to an end."

Phat Joe in a statement says "Thank you to all the fans for the opportunity. I had a lot of fun! Most importantly thank you to the entire RGB team. I will see you all in the near future. Watch this space."


More SABC Sport presenters getting the boot
Meanwhile the SABC has fired more sports presenters, telling a further 8 SABC on-air talent that their services won't be needed anymore as the SABC continues to cull on-air talent.

The SABC's now fired and famously matricless former chief operating officer (COO) Hlaudi Motsoeneng lied in 2016 and told SABC staffers that freelancers at the public broadcaster would be moved to permanent positions but that didn't happen.

Now as the SABC is once again on the brink of financial collapse similar to 2009 when it was saved through a government bail-out, the SABC is letting dedicated freelance talent go and not renewing contracts to cut costs.
on 8:50:00 AM