Is e.tv's adding its additional TV channels on OpenView HD to DStv? Here is what happened and why it looks like a possibility.

A reader alerted me to this, so I asked, after a reader showed how e.tv's website mentioned and added the additional channels packaged by e.tv, as suddenly now also being available on DStv.

Of course e.tv in high definition (HD) is already available on DStv, and the addition of the other or more channels from e.tv's stable are not that far-fetched an idea.

Looking up all of the individual e.tv channels with their own websites, they all suddenly listed their OpenView HD (OVHD) channel number, but now also a DStv channel number.

Surprise - the DStv channel numbers listed for the various channels were a perfect fit for open and unused DStv channels within the specific genre number sets:

Following a media enquiry, this information has now been removed from the various e.tv channels' webpages on Wednesday.

e.tv told me it was a mistake. But what was the mistake?

Both e.tv and MultiChoice - when asked if e.tv's additional channels packaged for OVHD is being added to DStv - responded by only saying negotiations are ongoing around the carriage agreement for the 24-hour TV news channel eNCA (DStv 403).

eNCA of course is also a channel produced and supplied by e.tv.

The question arises of how e.tv would know these virtually perfect channel numbers to choose and list on DStv without any input from MultiChoice. Is this just co-incidence?

Why would somebody take the time to do that if there was no reason to?

On Wednesday another reader noticed this eToonz+ on DStv in the 1-plate: 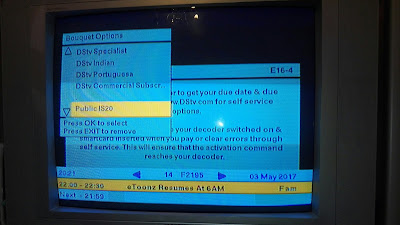 It's not really that far-fetched a stretch to think that in the renegotiation of the eNCA channel, the other channels from eMedia Investments could be lumped together in a bigger, more comprehensive deal.

It was after all the plan with StarSat which would at one point have had eToonz+ and some of the other channels besides eKasi+ before negotiations between OVHD and StarSat didn't work out.
on 2:41:00 PM