Tropika Island of Treasure Seychelles on SABC3: Presenter Minnie Dlamini dishes on being in a bikini while games master Jonathan Boynton-Lee calls it his 'nicest shoot ever'.

Minnie Dlamini says being in a bikini the whole time while filming Tropika Island of Treasure Seychelles was different from any TV work she's done before, while games master Jonathan Boynton-Lee says it was his "nicest shoot ever".

The telly twosome are centrestage in the Seychelles from tonight at 19:30 on SABC3 when the 7th season, after last week's first episode introducing the various contestants, kicks off with the first episode and first challenge filmed in the Indian Ocean archipelago.

"We were shooting every single day, very, very long hours so it was a lot of work but it was very rewarding. I really can't wait for everyone to see the show."

She said this show was different from other TV gigs "because first of all I'm in a bikini the whole time - that was different. But it was also a lot of fun to just be in such a great environment. It was like holiday shooting - beautiful sunsets, incredible beaches, incredible scenery."

"One of the things about this season is that the consumer contestants [who each compete with a celebrity contestant] are stars in their own right," says Minnie Dlamini. "People are going to fall in love with them."

Jonathan Boynton-Lee who is the games master -a new role and element this season - tells TVwithThinus that although viewers will see a beautiful show they won't realise how much hard work actually goes into it to make it look beautiful.

"It's long hours and people don't see all of the hard work that goes in behind-the-scenes; the massive number of crew getting the shots and the 10 cameramen and the sound guys and the directors and everyone setting up the games."

"We had a crew of over 50 people there and the amount of work and dedication that goes into the show is crazy."

"This really is going to be the most epic season. These games were so well designed that there's never a point during the competition where you could say this or that team is going to take the challenge - all of them are the perfect balance of physical and mental - and that is what makes for great television".

He said being on the Seychelles was "the nicest shoot ever. I was living on a tropical island for three weeks. It was awesome. It's like being stranded on an island - but in luxury. It was definitely a highlight of my career so far doing Tropika Island of Treasure Seychelles." 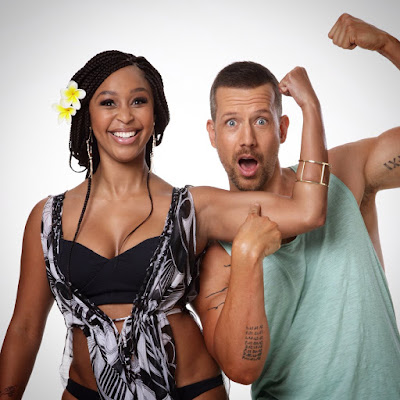 Cool theme song
In another first, Tropika Island of Treasure Seychelles has a theme song, sung by the celebrity contestants Karlien van Jaarsveld, Emtee and Anga Makubalo (NaakMusiQ) in a 3-way collaboration. "It was a great experience and turned out even better than what we even hoped for," Karlien van Jaarsveld told TVwithThinus.

"Originally it would have been just a short theme song for the show specifically, but now it's being used as a full song that people can download with the proceeds from the song sold on iTunes and Google Play going to the Childhood Cancer Foundation of South Africa (CHOC).

"It's amazing for me how incredibly talented Emtee is," says Karlien van Jaarsveld. "They said they wanted a rap influence within the song. Emtee literally went and sat outside for 5 minutes, wrote a rap, and that's the very rap infused melody that's incorporated into the song. Very, very talented."

"While we were in the Seychelles filming, I knew that we were filming a world-class show".

Hamilton Ngubo, SABC3 programme manager, said that "at SABC3 we're really excited. This season on SABC3 comes as we're launching new shows in April. We're looking forward to seeing the chemistry between the celebrities and the consumer contestants".
on 1:35:00 PM