Pressure mounts over the removal of ANN7 as toxic 'brainwashing trash' from DStv, as petition grows to over 11 000 signatures within 5 days. 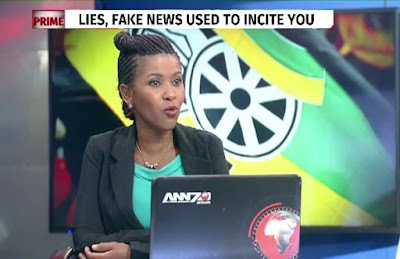 Pressure is mounting over the removal of the Gupta-news ANN7 TV news channel from DStv, with a petition that was started 5 days ago that has already racked up more than 11 100 signatures and comments from concerned viewers.

DStv subscribers are vocal about not wanting to pay, and having their monthly subscription fees funding, the "toxic" TV news channel from Infinity Media Networks that belongs to the controversial Gupta family and that is accused of broadcasting so-called fake news.

DStv subscribers are specific in that they don't mind a news narrative with a different perspective, but that they are against biased news and propaganda and outright false news reporting devoid of facts.

Furious DStv subscribers say ANN7 is fueling division in South Africa with its alleged fake news, not contribution to nation-building and is broadcasting propaganda favouring the Gupta family and the embattled president Jacob Zuma.

Following ANN7's coverage this past Thursday night regarding the shocking cabinet reshuffle that saw Pravin Gordhan axed as finance minister, the petition was started with droves of DStv subscribers saying that they've finally had enough.

Viewers were shocked by what they say is biased, slanted and untrue coverage on ANN7 that used analysts like Kenny Kunene to weight in on the cabinet reshuffle, while anchors like Sindy Made giggled in glee.

The petition on petitions24.com, created by Dan Govender, instantly struck a cord with thousands of people who have signed and who continue to add their signatures and comments by the thounsads by Wednesday afternoon.

So fast did the petition amass signatures and galvanise support, that "DStv Must Remove ANN7" has grown within days to become the 3rd most supported petition for 2017 on the global petition site, just behind a petition calling for stop of the slaughter of Polish horses, and a petition against a change to Romania's penal code.

MultiChoice that carries ANN7 since August 2013, in response to a media enquiry about the fast-growing petition, told TVwithThinus that "we provide a platform for a number of local and international news channels over which we have no editorial control".

"Concerns over content and or facts portrayed by any channel can be lodged at the Broadcasting Complaints Commission of South Africa (BCCSA) at bccsa.co.za".

MultiChoice was asked what the pay-TV provider makes of people saying they want to cancel their DStv if ANN7 is not removed and what the value is that MultiChoice sees in carrying ANN7 on DStv, but didn't answer these questions specifically.

ANN7 was also asked for comment. ANN7 didn't respond with a statement to a media request made earlier this week seeking comment about the petition and its growing, thousands-strong signatures.


'ANN7 a total disgrace to the media'
"That channel insults my intelligence and they're one sided and fake news. I can't pay for that nonsense," said Kenneth Sefatsa who signed the petition, echoing thousands of similar remarks.

"I don't want sh*t and fake news on my nearly R1000 DStv package. I expect quality for that monthly fee," said Ray Buchanan of Johannesburg.

Aveen Mahabal from Durban said "I do not want my subscription contributing to ANN7. Please stop this biased propaganda station. I will cancel my DStv if it doesn't happen".

"We look for opposing views on a news subject not blatant misrepresentation of the truth which has become the modus operandi of ANN7," said Richard Mathieson of Cape Town.

"ANN7 is disgustingly biased and ridiculously amateurish. It is like watching a Standard 5 play," said Andrew McGill from Durban.

"I cannot continue paying for fake news, it must be optional to have ANN7 in my package. This is a propaganda news channel coming with apartheid tactics of dividing the people," said Thabo Sopoli from Brits.

Mark Kirkness from Randburg said "Standards of good journalism are non-existant, the presenters act unprofessionally and make no attempts to hide their bias, and the stories are frankly made up. Providing a platform to such an organisation through the DStv network is unacceptable. I object to having my subscriptions contribute to airing this drivel. DStv simply cannot afford to be associated with this disgusting channel. Drop ANN7 from your offering, or we will cancel our DStv subscription."

Asaf Thokwane from Mpumalanga said: "I value media for the role it plays in informing people and ANN7 is a total disgrace to the media".

"So-called 'analysts' and handpicked guests are imbeciles and should not be allowed a platform to spout their venom," said Brian Bryce.

Yusuf Mia from Durban said "I've watched that broadcast. It was so full of biased and unintelligent comments that one worries if the masses watch this idiotic vitriol what negative effect it will have on the country. I will not pay to have such brainwashing trash on my DStv bouquet".

Mfanafuthi Mbuli said: "As a client with DStv I strongly feel that some channels are not educating us or even doing something to uplift our country. The station is surrounded by a lot of scandals and I feel my contribution to the channel is showing support. I therefore request DStv to remove this channel from my package."

Kgathaso Mosalla from Pretoria said: "The last time I checked I was living in SA not Russia. I refuse to pay let alone to be subjected to this nonsense called ANN7!"

"DStv, if you must show ANN7 then please group it with the cartoons and fairy stories where it belongs," said Ross Spearing from Port Elizabeth.
on 12:40:00 PM