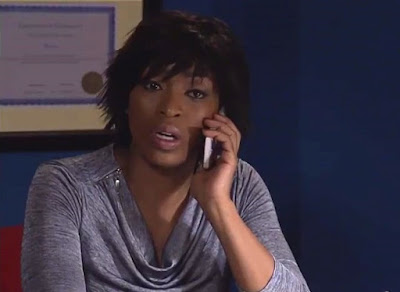 In a shocking case, the SABC that was slammed as grossly negligent, has been fined R10 000 after its SABC3 weekday TV soap Isidingo decided to use a woman's real telephone number that invaded her privacy and caused such havoc in her life that she even got a warning letter at work.

Meanwhile the SABC as part of its defense said "mistakes like these are bound to happen at some point".

While the American TV industry for decades has used fake digits starting with "5-5-5", the SABC used a real woman's real cell phone number in a late November 2016 episode of Isidingo on SABC3 that immediately caused havoc in her life.

She was instantly flooded by a barrage of calls and messages that she couldn’t control. It got so bad that she was disciplined through a warning letter in December 2016, negatively impacting her HR record at the railway company she works for.

The SABC offered up an apology but the woman, Thapelo Diale, who had lodged a complaint with the Broadcasting Complaints Commission of South Africa (BCCSA), said that wasn't enough for the personal chaos Isidingo caused and that she had to endure as a result of the South African public broadcaster's negligence.

She told the BCCSA of the emotional harm and verbal abuse she suffered when answering her phone when it was calls from people who got her number from Isidingo.

The SABC told the BCCSA that actor Shona Ferguson, who plays Thapelo "Tyson" Mokoena in Isidingo produced by Endemol Shine Africa, was told by the director in a scene shot in October 2016, to write down a cell phone number for another character as per the script.

The SABC revealed that the Endemol Shine Africa's script for the Isidingo episode "did not have a cell number for the character to use at the time when the scene was being shot".

That was when the Isidingo character of Thapelo wrote down the number of a real-life Thapelo – that of Thapelo Diale living in Johannesburg.

The SABC had the audacity to tell the BCCSA that "mistakes like these are bound to happen at some point" because "human beings drive the SABC".

The BCCSA said "it constituted a breach of her privacy and disrupted her work and that of her colleagues".

The BCCSA slammed the SABC as "grossly negligent to randomly choose a cell phone number for use in a popular soap opera".

The BCCSA said "many viewers form personal relationships with actors and therefore may continue to call the number. The scriptwriters and producers should have foreseen that the number could be a real and private number belonging to somebody".

Invited to the Isidingo set
After the decision to do an on-air apology, Thapelo Diale appealed the judgment, saying she didn't believe that the judgment is proportional to the offence.

She told the BCCSA that "I feel that Isidingo seems to be getting away with just a slap on the wrist whereas we don't even know if the apology will actually stop the consequence of their negligence; not forgetting the irreparable dent to my employment record by way of a warning letter."

"It needs to hit them in the pocket so as to appreciate the magnitude of the inconvenience caused."

The SABC's broadcasting compliance department that argued for an apology to suffice, told the BCCSA's said that "given the time that has since elapsed since the incident took place, broadcasting an apology shows that the SABC is a caring and responsive broadcaster".

The SABC said "this unfortunate incident has taught us critical lessons about handling matters about invasion of privacy".

Later on during the hearing, the SABC offered to broadcast an apology and invite Thapelo Diale to the Isidingo set to meet the actors as well as Shona Ferguson who gave out her cell phone number on the air.

In the end Thapelo Diale and the SABC agreed that the SABC shouldn't broadcast an apology, with Diale fearing that it might encourage even more callers to start calling her number again.

She also asked that the SABC's lawyers must urgently write her employer to explain what happened and to ask for the warning letter that she got to be rescinded, and that the SABC must ensure that her cell phone number is removed from all Isidingo footage and the soap’s YouTube uploads.

"The SABC failed to demonstrate that it took exceptional care and consideration before calling out a mobile number live on TV, without first checking out if it belongs to anyone," the BCCSA found.

"This act, in our view is tantamount to gross negligence on the part of the broadcaster."