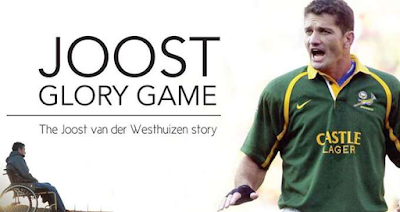 Following the death of rugby player Joost van der Westhuizen on Monday afternoon, M-Net Movies Showcase (DStv 107) is adding the documentary film, Glory Game, to its schedule that the pay-TV broadcaster will show on Monday night at 21:00.

The 86 minute documentary from Blink Pictures, executive produced by Odette Schwegler and Joost van der Westhuizen with Odette Schwegler as director, covers the former Springbok rugby hero's struggle with the crippling Motor Neuron Disease he was diagnosed with a few years ago.

The documentary includes interviews with commentators and former rugby players, as well as Joost van der Westhuizen himself who said that he was told he only had two years life to live. "I said 'stuff them', I will decide when I go".

"In the beginning you go through all the emotions. And you start to ask, 'Why me?' And It's quite simple. Why not me?"

From former South African Springbok captain to his scandalous fall from grace and his valiant battle with the disease that claimed his life on Monday afternoon, Joost van der Westhuizen lived a very public life.

In Glory Game he gave cameras an up close and personal look as he once again laid himself bare to the world in his fight for survival against Motor Neuron Disease.

Glory Game is described as "a compelling tale of redemption, set against the backdrop of sporting glory"and "the story of a modern day warrior forced to face his own human frailty. He discovers that beyond fame and success, lies the true wealth of life and shows that within a ravaged body can surge the spirit of a survivor."