Why did M-Net put Emerald City on Vuzu AMP on DStv when this Games of Thrones like show clearly belongs on M-Net Edge? 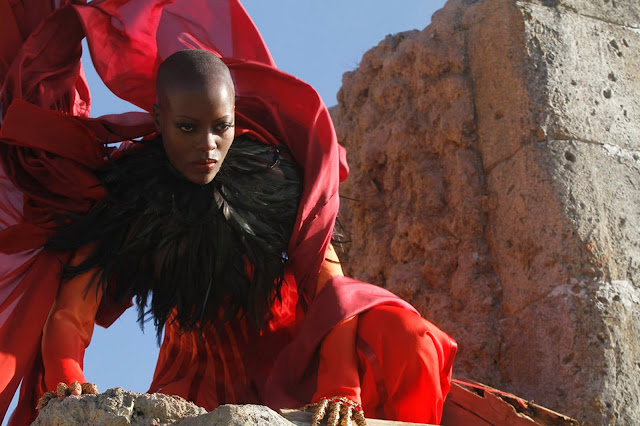 A woman is shown stabbed and killed from the back, explicitly pierced by a sword. In a whore house soldiers are sexed. A woman (a witch actually) is shown blowing her brains out and toppling over, while three young women are seen jumping to their deaths in a "hanging" suicide.

In another scene a murdered soldier's chopped off pieces (head etc.) is shown, while winter is literally coming and has now arrived as snowflakes sift down because of a problem with magic.

If you think it's the latest new episode from the upcoming 7th season of Game of Thrones on M-Net Edge (DStv 102), guess again.

It's scenes from the inappropriately placed and scheduled new American fantasy drama series Emerald City on Vuzu AMP (DStv 102) on a channel where DStv subscribers in their content discovery process won't expect to find it, and where it doesn't actually belong.

The at times graphic show - now four episodes in and one of M-Net's Express from the US titles - has been placed on the youth-centric Vuzu AMP although its much more similar in nature in look, sense, feel and some graphic depictions, to fantasy dramas like Game of Thrones, Vikings and Beowulf.

Guess on what M-Net channel on MultiChoice's DStv these types of shows are actually shown.

Somebody at M-Net acquired Emerald City and didn't bother to actually watch it. For Emerald City isn't Vuzu AMP's The Vampire Diaries.

If you like more mature fantasy drama series you will like Emerald City, a sort of deconstructed and definitely post-modernist version of the classic story about Dorothy who gets whisked away by tornado to a mystical new land where she meets up with a hodge-potch group all looking for the Wizard of Oz.

The steampunk fantasy series has a lot of unfolding, surprising twists but the problem is that some viewers might not know of its existence on the Pretty Little Liars channel.

Watching Emerald City on Vuzu AMP it feels as if M-Net wants viewers to watch content (and yes, Emerald City is good content) that people in the acquisitions and scheduling teams don't watch themselves. Or, if it is pre-watched, and still scheduled wrongly, then it borders on borderline incompetence.

Another issue: In America Emerald City is an NBC show. Strikingly the new TV season's biggest new hit drama series, This is Us, is nowhere to be seen anywhere in South Africa.

It begs the question: Why has This Is Us not been acquired by M-Net - or e.tv? A show in which American TV bosses have so much confidence that it was just renewed not just for a second but also for a third season?

And if This is Us (soo good!) is eventually seen in South Africa, how much of the entertainment value will be gone because viewers will already have been told, or have read somewhere about the emotional twists and fascinating plot twists that were all well guarded secrets in the first episode and subsequent hours of this terrific new series?

With both Emerald City and This is Us South African TV viewers are not being considered and served as paying TV customers as well as they should be.

If only viewers, like the Wizard of Oz, were able to quickly summon a witch (or a giant) to fix it, when something like this that's clearly a TV mistake, went wrong.
on 8:02:00 PM