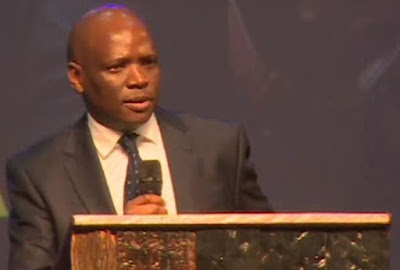 The SABC's belligerent [job title unknown] Hlaudi Motsoeneng hijacked the funeral of kwaito star Mandoza on Friday, launching into yet another jaw-droppingly inappropriate rant from the podium that the controversial public broadcaster enfant terrible is known for, this time blaming black people for the lack of transformation,

Instead of talking about the dead Mandoza (real name: Mduduzi Tshabalala) and doing a proper tribute to the celebrity who passed away, a finger-waving Hlaudi Motsoeneng usurped the funeral proceedings by talking about, and making it about himself, and his work at the SABC, vowing he will not be taken away.

While funeral speakers were told to limit their tributes to 2 minutes, the SABC's caustic nkalakatha launched into an off-topic rant of 13 minutes, exactly as he's often been seen doing at SABC press conferences, The New Age Breakfast briefings on SABC2 and in Morning Live interviews where he interrupts and keeps a stream of consciousness going without any intervention.

"And let me tell you, if I leave the SABC it will not be the first time. I left the SABC. I came back stronger and stronger. I hear people saying 'Hlaudi stress'. Hlaudi is stress free. I don't know stress. Maybe you are stress yourself because Hlaudi is delivering."

Hlaudi Motsoeneng slammed black people as "the problem" of transformation.

Hlaudi Motsoeneng said he introduced the SABC's 90% local content decision alone and nobody else and kept ranting, telling funeral director Mzwake Mbuli after 10 minutes of talking "just give me 3 minutes my brother, this is 90% [I'm talking about]".

"For the first time I was called by two president [sic] in Africa. I'm not going to mention their names. I'm going to meet them. They said to me, 'Hlaudi, now we want to use South Africa as benchmark because we want to introduce 90% in our countries."

"I have my own belief. And my belief is unique," said Hlaudi Motsoeneng.

"When I was born, I was an ordinary Hlaudi. And I'm going to make sure an ordinary employee delivers."

"You know what is good about me - and I'm not boasting. When SABC dismissed me, because I was empowering workers at the SABC," said Hlaudi Motsoeneng who told those attending Mandoza's funeral to "pay your TV licence".

Mzwakhe Mbuli slammed people who commented on Mandoza's weight and allegedly spread rumours that he had died [while he was still alive] and warned people to "pray and apologise to God".

After less than 2000 people pitched at the Orlando Stadium that can hold 40 000 and that Mzwakhe Mbuli said he would fill as the SABC broadcast scenes of an empty stadium, Mzwakhe Mbuli used the funeral podium to slam those who said the concert was empty, saying it was an insult to say things like that.

"Mandoza did not perform at an empty stadium. You must apologise for that too," said Mzwakhe Mbuli.