BREAKING. e.tv wants to dump all news from prime time; blames having to show viewers news as not generating revenue, warns news will threaten its future. 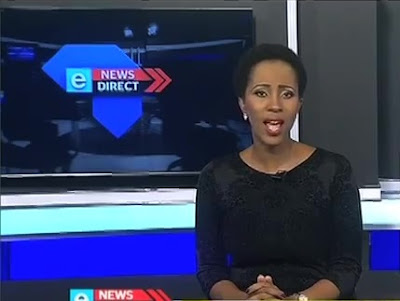 e.tv, South Africa's only free-to-air commercial TV broadcaster wants to dump news in prime time to make more money from more popular commercial fare like prime time soaps and is now asking the broadcasting regulator for permission to move its once number one rated TV news bulletin out of prime time.

e.tv now blames having to do news for the public as not being a revenue generator and warns that having to give South Africans a half hour of news during prime time might threaten its future as a broadcaster and cause "serious revenue challenges".

The shocking move will mean that the majority of the millions of South African TV viewers will be left with only the TV news supplied by the public broadcaster's SABC News division.

e.tv's eNews Prime Time news bulletin was for many years the number one rated and most watched TV news bulletin on South African television until e.tv started tinkering and moving the bulletin and tweaking the format in favour of its commercial soaps like Rhythm City and other content.

Its latest couple of moves over the past year, resulting in the latest, recently introduced eNews Direct, has had an ongoing negative impact on e.tv's ratings during prime time.

Besides the 30 minutes of news in prime time, e.tv has to broadcast at least 2 hours of news programming per day.

If approved, the shocking move will mean no more news for e.tv's 17 million daily viewers during the time period when most South Africans watch television.

e.tv says broadcasting news to South African viewers during prime time suddenly "no longer makes sense now" although the majority of South African viewers still depend on this news, although eMedia Investments also runs the eNCA (DStv 403) as a TV news channel but for pay-TV viewers on MultiChoice's DStv satellite pay-TV platform.

Over the past year eNCA has itself dramatically scaled back its news ambitions, shedding on-air talent and staff behind the scenes as it cancelled current affairs programming, closed all foreign news bureaus and got rid of its entire African reporting corps.

"The idea of relying on a single prime time bulletin has inveitably become antiquated and e.tv needs to be able to take this into account with regard to its overall programming scheduling," says Mark Rosin, eMedia Investments' group chief operating officer (COO).

"We have a long history of broadcasting quality news on e.tv and while the prime time condition may have catered to our audience's needs in 1998 when we first launched the service, it no longer makes sense now".

Although he wants to take news away during prime time on e.tv, Mark Rosin says "e.tv remains committed to delivering a quality independent news service and broadcasting local content that is in the public's interest".

e.tv says English news bulletins in prime time have seen a rapid decline in ratings across all free-to air channels over the last few years but the channel fails to mention that ongoing erratic timeslot and format changes are to blame for viewers fleeing e.tv and SABC3's flagship bulletins.

"We have seen our English prime time news audience decline rapidly, despite numerous attempts to retool the bulletin. And we are not alone - our competitors have experienced the same thing."

"As a commercial broadcaster generating most of its revenue in prime time, this presents serious revenue challenges, which ultimately lead to commercial viability challenges," says Mark Rosin.

e.tv says if its allowed to dump TV news outside of prime time, the channel will be able to programme and schedule commercially popular viewing "that has a significantly greater audience demand and curb current revenue losses".
on 4:42:00 PM