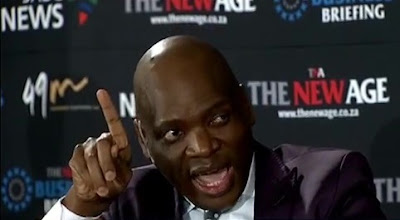 The controversial and famously matricless Hlaudi Motsoeneng is currently mired in a protracted court case following the Public Protector's report from February 2014 ordering him to be suspended and finding that he "never should have been appointed at the SABC", as well as the Western Cape High Court which ruled twice that the SABC suspend him and start a disciplinary hearing immediately. He is appealing the decision.

Hlaudi Motsoeneng this year already said several times publicly that Naspers' satellite pay-TV platform MultiChoice, which runs the DStv service and carries SABC channels, must pay the SABC and that he wants more money from MultiChoice.

On Monday at the latest The New Age breakfast briefing held in Sandton, Hlaudi Motsoeneng reiterated that the "MultiChoice partnership is to also make sure that we sustain employees within the SABC, we create jobs".

The finger-waving Hlaudi Motsoeneng on Monday said that he now also wants decoder manufacters to now contribute to the SABC and pay a levy – especially new decoder manufacturers who are getting lucrative government tenders worth millions of rand to manufacture the locally-produced set-top boxes (STBs) which millions of TV households will have to buy in the switch from analogue to digital terrestrial television (DTT).

"Some of our own people can't pay TV licence. How do we make sure that when these people manufacture those boxes, they also pay levy for SABC to represent those people who can't afford to pay TV licence? They should also contribute as business people," said Hlaudi Motsoeneng as decoder manufacturers who were present shook their heads and one uttered a silent "wow".

"Your decoders, when you buy decoders, you pay TV licence – the business people."

"We are also saying the same manufacturers, when they distribute those decoders, they should be able to say 'Where is your TV licence?' But they shall make sure that they pay TV licence first."

DTT contact centre
Details have so far been scarce about the national contact centre that must be established to help ordinary South Africans with enquiries and help over the phone with their decoders, faults, and decoder and antenna installation issues after they buy a STB during the digital TV migration process.

At the breakfast briefing, the minister of communications, Faith Muthambi, said that it will have to be made as easy as possible for people.

"I’m a decoder holder of DStv," said Faith Muthambi. "I need to stand on the line, phone the call centre, you’ll be told you're caller 2 000 and something. It's airtime that I'm using, and then I have to hold. The thing about the poor old man somewhere in the Northern Cape who is relying on a pension grant, where is he going to get this money?"

No talk about EPG, channel allocation
At the breakfast briefing it was revealed that no discussions regarding DTT have taken place about the consolidation of on-air services, like the electronic programme guide (EPG) for free-to-air STBs or channel allocation – which TV channel gets what number and is placed where.

The government has no answers for how the 5 million poor TV households who will get a STB for free worth about R700 to R800, as well as antennas through the South African Post Office, will be prevented from selling that asset for money once they receive it.

The government has set aside billions of rand to subsidise 5 million of the poorest TV households who will get a STB for free, although it worked with outdated figures which according to the 2011 national census places indigent households who will actually qualify for a free decoder now at 8.3 million.

South Africa is years behind with the switch from analogue to digital terrestrial broadcasting and on 17 June embarrassingly missed the international agreed-upon deadline of the International Telecommunication Union (ITU) to complete the process.

On Monday at the breakfast briefing, Solly Mokoetle, the head of South Africa's DTT programme said missing the deadline "is not a train smash".
on 1:12:00 PM